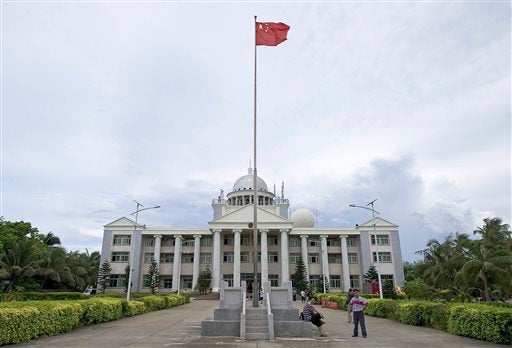 In this July 21, 2012 file photo, Chinese people chat in front of an administration office building for the Xisha, Nansha, Zhongsha islands on Yongxing Island, the government seat of Sansha City off the south China’s Hainan province. AP File photo.

BEIJING, China—China is building a school on a remote island in the South China Sea to serve the children of military personnel and others, expanding the rugged outpost it created two years ago to strengthen claims to disputed waters and islands.

China established the settlement of Sansha—which Beijing designates a “city” and has a permanent population of 1,443—on tiny Yongxing island to administer hundreds of thousands of square miles (kilometers) of water where China wants to strengthen its control over the potentially oil-rich territory.

Vietnam, the Philippines and the United States criticized Beijing for establishing Sansha, saying it risked escalating regional tensions. The island is about 350 kilometers (220 miles) south of China’s southernmost province, in the Paracel chain, which is also claimed by Vietnam.

The Sansha government said in a statement on its website that construction on the school started Saturday and was expected to take 18 months. It said there were about 40 children of school age on Yongxing Island, and the school could also educate the children of police, army personnel and civilians stationed on the islands, some of whom had to stay with grandparents in far-off hometowns.

When China created Sansha in July 2012, the outpost had a post office, bank, supermarket, hospital and a population of about 1,000. By December, it had a permanent population of 1,443, which can sometimes swell by 2,000, according to the Sansha government.

Now it has an airport, hotel, library and five main roads, mobile phone service coverage and a 24-hour satellite television station. It also has its own supply ship that brings in food, water, construction materials as well as people who live and work on the island.

ADVERTISEMENT
Read Next
South China Sea trade routes safe despite rows
EDITORS' PICK
DILG to stranded workers: ‘Stay where you are’ until Luzon-wide quarantine is over
BREAKING: 1,075 people in PH has coronavirus disease – DOH
Style and music journeys with Claudia Barretto
UP-PGH wards for COVID-19 patients finished in 5 days
IATF: Food firms to operate with 50% of workforce during Luzon quarantine
Cebu City closes its borders
MOST READ
Tootsy Angara bares neighbor wanted them out of village
Pacquiao to seek probe on leaked private letter from Barangay Dasmariñas
BREAKING: 1,075 people in PH have coronavirus disease – DOH
593 health volunteers sign up to fight COVID-19, says DOH
Don't miss out on the latest news and information.