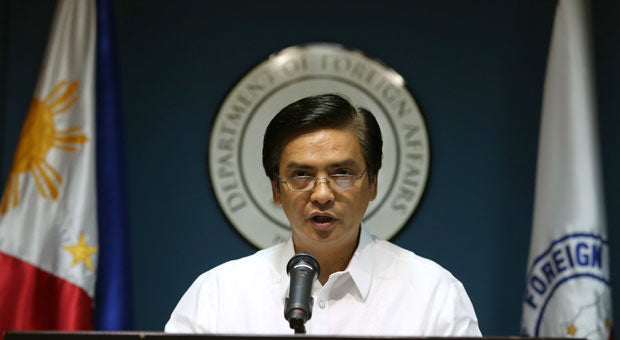 MANILA, Philippines—The Philippines has protested China’s reclamation of land on a reef in the West Philippine Sea that can be used to build an airstrip or an offshore military base, in yet another provocative move by Beijing in the disputed waters, the Department of Foreign Affairs (DFA) said on Wednesday.

President Aquino raised the Chinese activity in Philippine waters at the Association of Southeast Asian Nations (Asean) summit in Burma (Myanmar) on Sunday, the DFA said in a statement.

“The Philippines protested the Chinese reclamation on Mabini Reef (international name: Johnson South Reef). The Chinese side rejected the protest,” the DFA said.

Foreign Secretary Albert del Rosario said the Philippines filed the protest on April 4, but Beijing rejected it on grounds that the reef was part of Chinese territory.

Asked if China was building an airstrip on the reef, Del Rosario said, “That’s one possibility.”

The Department of National Defense (DND) also reported the Chinese activity on Mabini Reef on Wednesday and demanded that Beijing put a stop to it.

“This activity contravenes the spirit of the [Declaration on the Conduct of Parties in the South China Sea] and is a security concern of all in the region,” DND spokesman Paul Galvez said, referring to the nonaggression and keeping of the status quo agreement that Asean and China signed in 2002.

“These provocative acts, which they should immediately stop, further disturb the fabric of regional peace and stability,” Galvez said.

Philippine aircraft searching for a missing Malaysia Airlines jetliner in March also spotted the continuing reclamation on the reef by at least one Chinese ship backed by smaller vessels.

“We can confirm that there is an ongoing reclamation or earth-moving activities [there],” Galvez said.

“Is that a possible airfield? We cannot speculate at this point,” he said.

“It has been getting bigger and bigger,” he added.

The government estimates that the reclamation has turned the submerged reef and a sandbar into a 30-hectare landmass that transformed the submerged coral outcrop into an islet, The Associated Press reported, quoting an unnamed government official.

The discovery of the reclamation, and the possibility of China building an airstrip on the reef, would likely raise alarm among rival claimant countries because it would bolster Beijing’s naval and air force mobility in a South China Sea region far from the Chinese mainland.

Mabini Reef, which the Chinese call Chigua Reef, is 300 kilometers away from Palawan province, well within the Philippines’ 370-km exclusive economic zone (EEZ).

Vietnam is also claiming Mabini Reef, but Beijing seized the reef and other coral outcrops in the area from Hanoi after a deadly naval skirmish in 1988.

There was no immediate comment from the Chinese Embassy in Manila on Wednesday.

Last week, the Chinese press played down the reef reclamation and construction.

Quoting an unnamed source described as close to the construction, the Global Times reported China was merely “renovating the living facilities for troops stationed on the reef.”

In the statement issued Wednesday, the DFA said the Philippines asked the United Nations to “clarify Mabini Reef’s physical character” in its “memorial,” or brief, submitted to the United Nations Tribunal for the Convention on the Law of the Sea on March 30, which details the merits of its case against China in their territorial dispute in the West Philippine Sea.

The West Philippine Sea is part of the South China Sea within the Philippines’ EEZ, but China claims 90 percent of the 3.5-million square-kilometer South China Sea, including waters close to its neighbors’ shores.

Beijing has refused to take part in the arbitration, the case for which Manila filed in January last year in a bid to stop Chinese incursions into the West Philippine Sea.

The Philippines has also asked the arbitral court to nullify China’s claim over almost the whole South China Sea.

That extensive claim has set China against not only Vietnam and the Philippines, but also against Brunei, Malaysia and Taiwan, which claim parts of the sea that are crisscrossed by sea-lanes where a third of annual cargo passes and where islands, islets, reefs and shoal are believed to be sitting on vast energy and mineral reserves.

China continues to assert “indisputable sovereignty” over the waters and has accused other claimant nations, including the Philippines and Vietnam, of undertaking provocative actions pending resolution of the dispute.

Tensions in the South China Sea have flared up recently following the Philippines’ arrest of Chinese fishermen caught poaching sea turtles at Hasa-Hasa Shoal (Half Moon Shoal), 93 km off Palawan, and China moving a deepwater drilling rig near the Paracel Islands in the East Sea, within Vietnam’s EEZ, sparking confrontations between dozens of Chinese and Vietnamese ships.

Disturbed by confrontations in the East Sea, US Secretary of State John Kerry phoned Chinese Foreign Minister Wang Yi on Tuesday and told him China’s installation of an oil rig and the deployment of vessels in the disputed waters were “provocative.”

The Chinese side responded by saying that words and actions by the United States had “emboldened” other claimants to take provocative actions in the sea.

“It is true that provocative actions have been seen in the South China Sea recently. But they are not taken by China. It is nothing but the wrong words and actions made by the US side on maritime issues that have emboldened some countries to take provocative actions,” Hua said in a press conference in Beijing on Tuesday.

Security analysts believe moving the drilling rig into the East Sea is China’s response to US President Barack Obama’s four-nation tour of Asia in April and his assurance to allies Japan and the Philippines that the United States would defend them if they were attacked.—With reports from AFP and AP

Read Next
Fil-Ams urged to register as organ donors
EDITORS' PICK
Cebu City closes its borders
Style and music journeys with Claudia Barretto
BREAKING: 1,075 people in PH has coronavirus disease – DOH
UP-PGH wards for COVID-19 patients finished in 5 days
DILG to stranded workers: ‘Stay where you are’ until Luzon-wide quarantine is over
IATF: Food firms to operate with 50% of workforce during Luzon quarantine
MOST READ
BREAKING: 1,075 people in PH has coronavirus disease – DOH
In Iran, false belief a poison fights virus kills hundreds
DILG says middle class will also get govt aid during Luzon-wide quarantine
No more bread? Company forced to limit production
Don't miss out on the latest news and information.