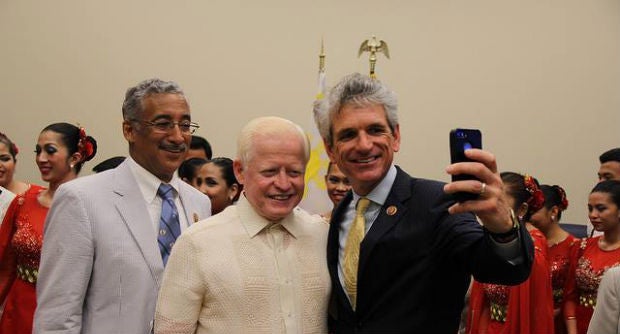 • 40 members of Congress join, many from areas with large Filipino constituencies

WASHINGTON, DC — The Philippines Embassy and members of the US Congress last week re-launched the US-Philippines Friendship Caucus in the House of Representatives.

More than 40 congressmen representing both Democratic and Republican parties have agreed to become members of the Caucus, the Embassy reported. The Friendship Caucus was established during the term of Foreign Affairs Secretary Albert F. Del Rosario as ambassador to the US.

“The reinvigoration of this Caucus will lead to increased interactions not only between our governments but also between our citizens,” Ambassador Jose L. Cuisia, Jr. said in his remarks during a reception he hosted at the Rayburn House Office Building on the eve of the 116th anniversary of the proclamation of Philippine independence.

“Let us seize this great opportunity to further strengthen the bond between our two nations. The House is one that is closest to the people, and this is where our bilateral relations become even more meaningful,” Cuisia said.

Eighteen lawmakers led by Caucus Co-Chair Bobby Scott (Democrat, Virginia) and Ed Royce (Republican, California), Chair of the House Committee on Foreign Relations, were present at the reception that was also attended by Embassy officials as well as leaders of the Filipino community and officials from the Department of State and the Department of Defense.

In their remarks, Congressmen Scott, Royce and Honda cited the strong bilateral relations between the Philippines and the US and the important role played by the 3.4 million members of the Filipino community.

The lawmakers, who included a number who came from congressional districts with large Filipino constituencies, also gave assurances of their support for legislation and other initiatives that would have a positive impact on the Philippines and the Filipino people, including peaceful efforts to resolve the West Philippine Sea dispute, veterans concerns, immigration reform and the grant of Temporary Protected Status (TPS).

In his remarks, Cuisia also expressed his appreciation for the strong support of the US Congress, particularly in the aftermath of Typhoon Haiyan.

“Our friendship is enduring and dependable. When Super Typhoon Haiyan struck the Philippines, we were heartened by the strong support of the US Congress,” Ambassador Cuisia said as he cited the two congressional resolutions on Haiyan that were introduced in the House of Representatives.

He also mentioned the briefing on Haiyan that was organized by the Caucus upon the initiative of Congressman Scott and his Co-Chair, Darrell Issa (Republican, California) in coordination with Congressional Asian Pacific American Caucus led by Rep. Judy Chu (Democrat, California).

Cuisia also expressed appreciation for the visit to the Philippines of two congressional delegations led by Rep. Chris Smith (Republican, New Jersey) and Congressman Royce, to express solidarity with the Philippine Government and with the victims of the typhoon.

He also cited the support of legislators for the grant of TPS for the Philippines as well as the efforts led Congressman Swalwell for the passage early this year of the Philippines Charitable Giving Assistance Act.

The reception was capped by an impressive performance by the University of Sto. Tomas Singers who are in Washington for a series of engagements.