More reservists seen in next Balikatan

MANILA, Philippines—The recent Balikatan joint military exercises with the United States and Australia involved over 200 reservists of the Armed Forces of the Philippines (AFP) and officials hope more will participate in next year’s war games to hone their military skills. 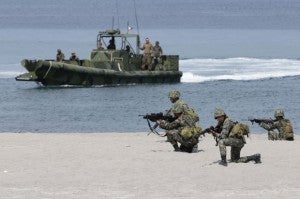 Philippine marines take their positions after being dislodged by a fast boat with their US counterpart during the joint U.S.-Philippines military exercise dubbed Balikatan 2014 Friday, May 9, 2014 at the Naval Training Exercise Command, a former US naval base, and facing the South China Sea at San Antonio township, Zambales province northwest of Manila, Philippines.AP

“It’s part of our whole-nation concept where not only the military deals with the security-issues of our country,” AFP Chief of Staff Gen. Emmanuel Bautista told the Inquirer on Friday.

“Our reservists are actually our (military’s) link to the rest of the nation so we want them to get involved and appreciate the situation we face now … how we deal with the security situation,” he said.

At the recently concluded Balikatan, reservists from the Philippine Army, Navy and Air Force participated in different activities, from the battle staff to the assault live fire exercises to the humanitarian projects.

A total of 244 reservists joined this year’s exercises, said Navy Capt. Rigoberto Banta of the Office of the Deputy Chief of Staff for Reservists and Retirees Affairs.

He said the battle staff exercises held at the Western Command in Palawan and the Joint Task Force-National Capital Region were also staffed by reservists who were senior officers.

Other reservists participated in the field training exercises “where their skills are developed,” Banta said.

The Army reservists were at the field exercises at Fort Magsaysay in Nueva Ecija; those from the Air Force were at Clark Field in Pampanga, while those from the Navy got a chance to board US Navy ships. Nikko Dizon