ZAMBALES, Philippines—Scores of US and Filipino marines launched mock assaults on a South China Sea beach in the Philippines on Friday in the 30th Balikatan exercises aimed at honing the allies’ combat skills.

The exercise came as tensions simmer between the Philippines and China over rival claims to the strategic waters.
With 87 members of the Philippine Marine Corps, 40 of their American counterparts were in support during the simulation of an amphibious operation at the Naval Education and Training Command in Zambales, Friday.

“What happened today is part of Balikatan 2014 on maritime security,” Lieutenant Annaleah Cazcarro said amid the scorching sun. 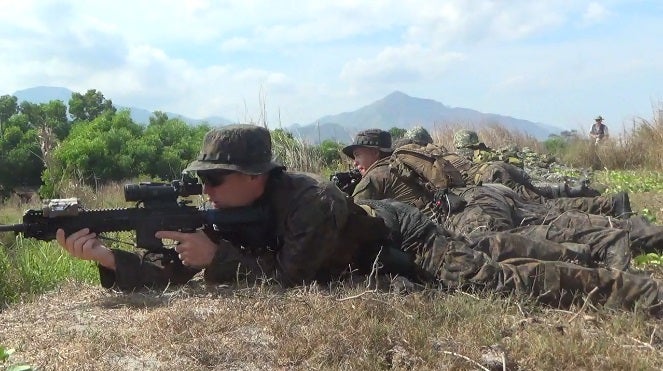 “It is part of our mandate to become more effective and efficient on maritime security.”

Aboard the PF16 Ramon Alcaraz and LC 551 BRP Dagupan City, Filipino and American Marines were deployed 500 meters away from the shore to simulate an amphibious raid on a beach environment.

“This was planned years before,” Cazcarro told Agence France-Presse (AFP) when asked if the exercises had any bearing on the latest maritime incident involving China, which the Philippines said occurred near Half Moon Shoal, 106 kilometres west of the large western Philippine island of Palawan.

After the simulated reconnaissance mission, the Marines who swam from the rubber boats to the shore returned to the mother ship and went on a full attack on their targets with the rest of the contingent.

Shouting “Volume Fire!” and “Bounce Up”, the teams scrambled up the sloping shore with assault rifles to surround a mocked-up enemy tent before running back to their boats in rapid manoeuvres.

“We’re here for the sake of training, to build up and develop our capabilities,” US Marines spokesman Captain Jeremy Scheier told Agence France-Presse when asked if they had a specific enemy target in mind.

With nearly 80 of the troops storming the beach and the five Filipino officials shouting “kuha,” the simulation was over in less than three minutes.

“Coordination went really well,” Scheier said. “It was a combined effort from the Philippine Marine Corps and and US Marine Corps.”

Scheiar said that no matter the condition or climate, Balikatan was an opportunity to train with the Filipinos.

“It can be used for any scenario involving amphibious operations,” Scheier said. “And the Filipinos are in the lead.” 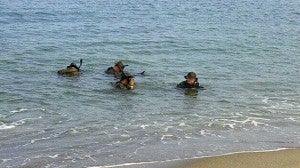 About 5,500 US and Filipino forces are taking part in the annual war games over a two-week period.

The Philippines, which signed a mutual defence treaty with the United States in 1951, has been involved in increasingly tense maritime confrontations with regional power China, which claims most of the sea including waters close to its neighbours.

The United States has said it takes no position in the territorial dispute.

However US President Barack Obama, on a state visit to Manila last week, warned China against using force in territorial disputes and said Washington would support Manila in the event of an attack.

In the latest incident on Tuesday, Filipino police detained a Chinese-flagged fishing vessel and detained its 11 crew members.

It has ignored a Chinese demand to free the vessel and crew.