FORT MAGSAYSAY, Philippines—With the Balikatan exercises in full-swing, US and Philippine troops held platoon live fire drills here on Saturday with the locals taking the lead in a performance that their counterparts found “impressive”.

“These exercises are primarily used for jungle warfare,” Captain Mark Anthony Ruelos, public affairs officer, said atop the Fernandez Hill where the exercises were held.

“The setting of the exercise is a direct simulation of the landscape where these operations are used,” said Ruelos.

With four US soldiers first scouting the area, 15 Philippine troops equipped with M16 and M14 rifles swooped down on their first target – a dilapidated house that simulated an enemy base. 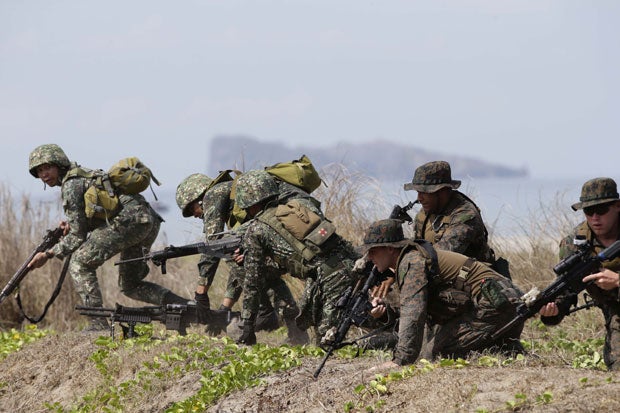 US and Philippine marines storm the beach to simulate a raid during the joint U.S.-Philippines military exercise dubbed Balikatan 2014 Friday, May 9, 2014 at the Naval Training Exercise Command, a former US naval base, and facing the South China Sea at San Antonio township, Zambales province northwest of Manila, Philippines. More than 5,000 U.S. and Filipino troops have begun two weeks of military exercises to flex their muscle in jointly dealing with potential crisis in the Philippines, which is prone to natural disasters and has been locked in a dangerous standoff with China over a disputed shoal. This year’s war games focuses on maritime security. AP

After the first target was neutralized, the other 15 rained fire on “enemy soldiers” guarding other targets.

“Upon the completion of the objective on the first target, the other half of the Philippine troops engaged the second target,” Ruelos said.

Major Joseph Weinburgh of the 3rd squadron 4th Cavalry regiment of the US Army, said that their Filipino counterparts have continued to impress the soldier in him.

“I am continued to be impressed by the Bravo Company,” Weinburgh said after the simulation. “We did not train them, they were just that good up to this.” “All my soldiers have been nothing but impressed.”

He reiterated that the Balikatan, which he described as “pretty successful,” was not meant to establish a partnership, but rather continue the relationship between the US and the Philippines.

Weinburgh added that the US presence in the exercises wasn’t meant to establish their leadership but support for the Filipinos who were in the leadership role in the Balikatan.

“Filipino officers lead everything, we are here just to support them,” Weinburgh said. “This is the best partnership.”