MANILA, Philippines—Nearly 6,000 American and Filipino troops will participate in next month’s Balikatan Exercises amid negotiations on increased rotation of US forces in the Philippines and heightening tensions in the West Philippine Sea (South China Sea)

Lieutenant Senior Grade Annaleah Cazcarro, co-director of the Combined Joint Information Bureau of the Balikatan exercises, said the that the field training exercises would be held in several camps nationwide. 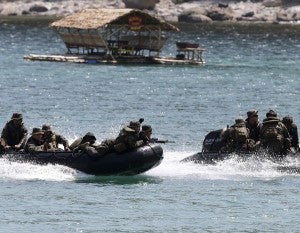 Maritime surveillance equipment demonstration will be conducted in Naval Education and Training Command in San Antonio in Zambales. Other training venues include Fort Magsaysay in Nueva Ecija, Clark Air Base and Marine Base in Ternate, Cavite.

Combined armed live exercise will also be held in Crow Valley in Tarlac. In Western Command in Palawan, which holds jurisdiction of the contested Ayungin Shoal and Scarborough Shoal over the West Philippine Sea, there will be training on humanitarian assistance and disaster response.

There will be at least 2,500 US troops that will participate and at least 3,000 Filipino soldiers.

Tacloban City and Legazpi City, which were hit by Super Typhoon Yolanda (Haiyan) will also benefit from joint exercises as civil military operations will be conducted  there.

Cazcarro said the Balikatan, the 30th iteration of the annual exercise, is not in any way related to the ongoing dispute in the West Philippine Sea.

“Balikatan is a long-standing military activity between US and Philippine militaries. This year’s Balikatan strengthens the relationship of the two countries. They learn from us and we learn from them,” said Cazcarro.

The Balikatan exercises will be held from May 5 to 16.