Philippines: China may be building airstrip at disputed reef 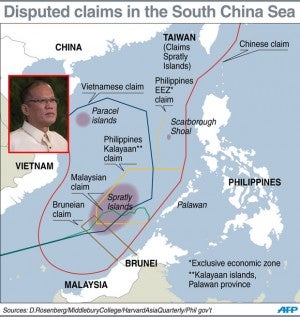 MANILA, Philippines—The Philippines warned on Wednesday that China may be building an airstrip on a reef in the South China Sea as the Asian superpower asserts its claim to most of the strategic area.

Foreign Affairs Secretary Albert del Rosario told reporters the Philippines had filed a diplomatic protest against China’s reclamation works on the reef last month, but Beijing rejected it on grounds the reef is part of Chinese territory.

Asked if China was building an airstrip on the reef, also claimed by the Philippines and Vietnam, del Rosario said: “That’s one possibility.”

“On 4 April 2014, the Philippines protested Chinese reclamation on Mabini (Johnson) Reef. The Chinese side rejected the protest,” a defense department statement said.

China had earlier built structures on the reef after seizing it and other outcrops from Vietnam in a deadly 1988 skirmish.

“We can confirm that there is ongoing reclamation or earthmoving activities in that portion,” Defense spokesman Peter Galvez told reporters.

“Is that a possible airfield? We cannot speculate at this point,” Galvez said.

“It has been getting bigger and bigger,” he added.

Chinese embassy spokesmen in Manila could not be reached for comment Wednesday.

The Philippines calls the outcrop the Mabini Reef while China calls it Chigua Reef.

It is part of the Spratly chain and is located about 300 kilometers (186 miles) west of the large western Philippine island of Palawan.

China’s claim to nearly all of the South China Sea, which straddles vital sea lanes and is believed to sit on vast oil and gas reserves, has strained its ties with Southeast Asian countries.

Earlier this month Vietnam accused China of ramming its ships in an encounter near another part of the sea where Beijing had deployed a deep-sea oil rig.

Those actions were described as “provocative” by US Secretary of State John Kerry in a phone call to Chinese Foreign Minister Wang Yi.

The Philippines in March filed a formal plea to the United Nations challenging Beijing’s alleged territorial claims to about 70 percent of the South China Sea, in defiance of Chinese warnings that it would seriously damage their already frayed relations.

Manila claims it has exclusive rights to exploit the resources of waters and outcrops within its “exclusive economic zone” that lie within 370 kilometers (200 nautical miles) of its coastline under international law.

Beijing has rejected UN arbitration and urged Manila to settle the dispute through bilateral talks instead.