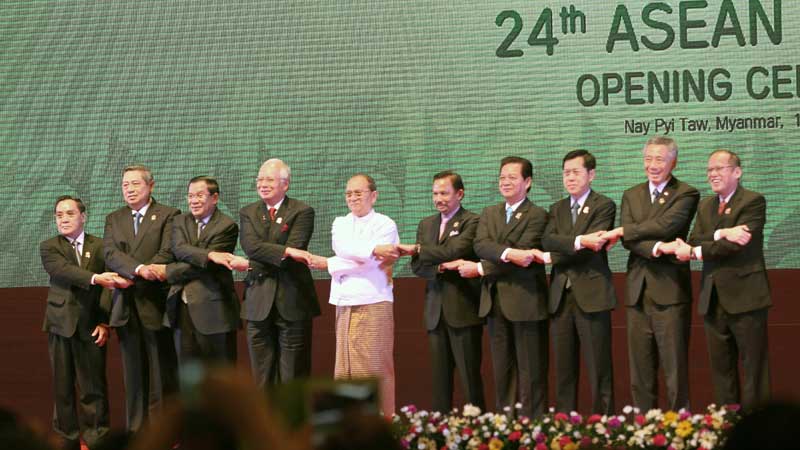 NAYPYITAW, Burma—Disturbed by China’s provocation in the South China Sea, the Philippines and Vietnam urged the Association of Southeast Asian Nations (Asean) on Sunday to make a united stand to maintain its relevance.

At a summit hosted by Burma (Myanmar), the Philippines and Vietnam pushed for stronger action to confront China’s aggressive behavior and some Asean leaders expressed concern over China’s provocative moves against the two members of the bloc.

But in their joint statement issued after the summit, the Asean leaders made no direct mention of China, indicating that few were willing to risk their countries’ political and economic relationship with the regional powerhouse.

At the retreat session, President Aquino apprised the other Asean leaders of the Philippines’ encounters with China in the West Philippine Sea.

Aquino also informed the body of the evidence the Philippines presented to the United Nations International Tribunal on the Law of the Sea in The Hague, the Netherlands, in March to support its case challenging China’s claim to 90 percent of the 3.5-million-square-kilometer South China Sea.

“During the retreat, I put in our own incidents with regard to Ayungin [Shoal], Scarborough (Panatag Shoal), Kalayaan Island Group, Mabini Reef and the Galoc service contract,” Aquino told reporters after the retreat, referring to the Philippines’ controversies with China in the resource-rich sea.

Aquino said many Asean leaders expressed concern over the tensions in the waterway, including one who called the latest moves of China “dangerous brinkmanship.”

But the Asean leaders reached a consensus that the territorial disputes in the South China Sea should be resolved peacefully, he said.

In the morning full session on Asean integration, Nguyen said the planting of the rig by state-owned China National Offshore Oil Corp. “gravely violated” the UN Convention on the Law of the Sea, and Declaration of the Conduct of Parties in the South China Sea.

China is a party to the 2002 nonaggression pact, Nguyen said.

China’s “extremely dangerous action is directly threatening peace and stability, and maritime security” in the area, he told the session chaired by Burmese President U Thein Sein.

Nguyen urged Asean to include the issue in its joint statement, and called on other countries, and international groups “to continue voicing protest on the serious acts, and support the legitimate demands of Vietnam.”

Vietnam is locked in a standoff with China in the Paracels, a group of islands in the East Sea, part of the South China Sea within Hanoi’s 370-kilometer exclusive economic zone.

Hanoi has accused Beijing of using water cannon and ramming its ships during confrontations over the rig in the last few days.

The Philippines has taken its territorial dispute with China in the West Philippine Sea to the United Nations for arbitration, angering China, which now harasses Filipino fishermen at sea vessels resupplying a small Filipino garrison on Ayungin Shoal (Second Thomas Shoal), the boundary of Philippine territory in the contested Spratly Islands in the South China Sea.

“They should not use gun boat diplomacy,” he said.

Malaysian Prime Minister Najib Razak also told the session that tensions in the South China Sea should be “managed calmly, responsibly and rationally.”

Najib called on all the parties to “exercise restraint” and “work together” for the peaceful settlement of the dispute, as well as abide by the UN Convention on the Law of the Sea and the Declaration of Conduct of Parties in the South China Sea.

He said that in the face of a “daunting situation,” Asean must show resolve to collectively deal with the matter “if we want to continue to be a respectable, reliable and relevant organization.”

Yet, in their joint communiqué issued after the summit, the Asean leaders made no direct mention of China.

They urged the claimants not to take actions that would escalate tensions in the South China Sea, exercise self-restraint and avoid violence.

The Asean leaders agreed to strengthen cooperation to fully and effectively implement the Declaration on the Conduct of Parties in the South China Sea in accordance with the UN Convention on the Law of the Sea.

They said Asean members should work toward an “early conclusion” of a code of conduct in the South China Sea.

In the Naypyitaw Declaration on the Realization of the Asean Community by 2015, they agreed to promote and uphold the rule of law in the conduct of relations, including the peaceful resolution of disputes.

They also agreed to further enhance Asean cooperation in promoting democracy, good governance and the rule of law, as well as the promotion and protection of human rights and fundamental freedoms of member countries “to enhance a rule-based community of shared values and norms.”—With a report from AP