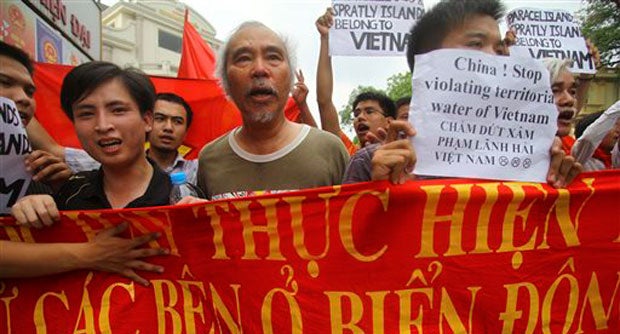 Vietnamese protesters carry a banner with a Vietnamese slogan reading, “China must respect and execute the Declaration on the Conduct of Parties in the South China Sea.” AP FILE PHOTO

HANOI, Vietnam—Anti-China mobs torched up to 15 foreign-owned factories and trashed many more in southern Vietnam as anger over the recent deployment by China of an oil rig in disputed Southeast Asian waters span dangerously out of control, officials and state media said Wednesday.

The unrest at industrial parks established to attract foreign investors was the most serious outbreak of public disorder in the tightly controlled country in years. It points to the dangers for the government as it manages public anger at China and also protests itself against the Chinese deployment in a part of the South China Sea it claims as its own.

The unrest late Tuesday at a Singapore-run industrial park and others nearby followed protests by up to 20,000 workers at the complexes in Binh Duong province. Smaller groups attacked factories they believed were Chinese-run, but some were Taiwanese or South Korean, VnExpress website quoted Tran Van Nam, the deputy head of the province’s people’s committee, as saying.

On Wednesday morning, groups of men on motorbikes remained on the streets and all the factories in the area were closed, said one park manager, who declined to give his name because of sensitivities of the developments. Riot police had been deployed.

Another said many foreign-owned factories were putting banners on the gates of the factories saying “We love Vietnam” and “Hoang Sa, Truong Sa -Vietnam”, using the Vietnamese terms for the Paracels and Spratlys Islands, South China Sea island chains disputed by Vietnam and China.

Nam said the protests Tuesday were initially peaceful but were hijacked by “extremists” who incited people to break into the factories. He said at least 15 factories were set alight and “hundreds” more vandalized or looted, while some security guards and unidentified “foreign experts” were assaulted.

Vietnam reacted angrily to the arrival of the deep-sea oil rig on May 1 close to the Paracel Islands, which are controlled by China but claimed by Hanoi. It has sent a flotilla of vessels to try and disrupt the rig. Some of the Vietnamese boats have clashed with Chinese ships sent to protect the oil rig.

Over the weekend, the government gave rare permission for street protests against China in cities across the country.

Those protests were enthusiastically covered the by the state media, unlike the ones on Tuesday.

The ruling Communist Parties in both countries maintain close links and until May 1 had been trying to handle tensions over the territorial disputes quietly. Vietnamese authorities are normally highly nervous of spontaneous public gatherings of any sort. Many of the leaders of the anti-Chinese protests are also calling for basic democratic reforms, presenting a challenge to one-party rule.

The standoff underlines China’s intention to aggressively pursue its territorial claims in the South China Sea despite complaints from smaller nations such as Vietnam and the Philippines, which also claim parts of the waters. The United States, a treaty ally of the Philippines, has called the latest Chinese action “provocative.”