• If he wins election, current city councilor and ex-mayor could be the first Fil-Am Superior Court judge in San Mateo County 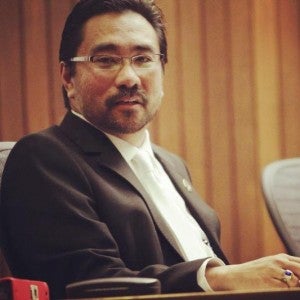 Buenaventura is currently a Daly City council member and former mayor, who is running for County Superior Court judge.

Buenaventura had attended an upscale private school in Manila, De La Salle Greenhills, and got a perfect score on his math test on his first day in an American school. But that wasn’t what the other kids noticed.

“I got made fun of a lot with my speech and heavy Filipino accent,” recalled Buenaventura who was just ten years old then. “I got bullied somewhat, being teased as someone fresh off the boat.”

American culture was a shock to the young boy’s system. Buenaventura couldn’t believe that the other students had never even heard of the Philippines. This was his first and most difficult life lesson.

He solved his problem not by fighting, but by reaching out and educating the other students.

“To survive, I let them understand who Filipinos are,” he said. “Even if were are a different culture, we are human beings who love their families who believe education is important who strive for a better future.”

Buenaventura continued to apply this problem-solving strategy through his life. It has served him well in his career as a lawyer and politician.

“We will never agree on everything, but there must be something we can agree on, that one thing that will join us together,” he said.

With his unassuming demeanor, Buenaventura is not a stereotypical politician. It’s his knack for reaching out and bringing people together that’s brought him places, politically.

He credits his mentor, Alice Bulos, who heads the Filipino American Democratic Caucus of the California Democratic Party, with showing him the power of community.

Standing up for underdogs

Though a believer in arbitrating peaceful solutions, Buenaventura is also a fighter, proven by his long record as a public and private defender.

He has tried several noteworthy case, including representing the youngest person, a 14-year-old, ever to be tried for murder in San Mateo County. 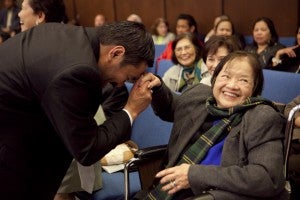 As a public defender, he tried murder cases, sex offenses and three-strike cases. Ray left the Public Defender’s Office to open his own practice in Daly City where he continues to focus on indigent criminal defense as a Private Defender.

He previously served as the Chair of the Private Defender Program Committee for two consecutive terms.

Bueneventura now hopes to put his varied experience as a public servant to even better use, as a judge in San Mateo County’s Superior Court.

He hopes to reduce the county’s caseload by creating diversionary programs to address first time offenses and petty crimes such as shoplifting. Diversion programs, that are hallmarks of problem-solving courts, aim to educate offenders and may include community service hours.

These programs save taxpayers money by reducing the number of misdemeanor cases being tried. It’s also been proven to prevent repeat offenses. San Mateo County, to date, does not have diversion programs of this kind.

Buenaventura also wants to increase people’s access to the justice system. Budget cuts have reduced the number of courthouses in San Mateo County, and has made it difficult for people to find relief from the local judiciary.

Buenaventura admits that it will take a lot of hard work to make more courtrooms available to the public. But he believes he’s up to the task, armed with his record and experience.

“It would be the ideal marriage of my 20 years of courtroom experience plus my belief in community service wrapped into one,” he said.

If elected, Buenaventura would be the first Filipino American to serve as superior court judge in San Mateo County, which has a sizeable Filipino population.

In typical Filipino fashion, Buenaventura shies away from shameless self-promotion. He advises young people about the value of not just talking, but of walking their talk.

“Success is not about tooting your own horn, but in letting others toot it for you because that’s more credible. It does you no good to just brag. But if others do it, they see your work, they have trust, confidence in you that means a lot,” he advised.

In Buenaventura’s case, Daly City’s great public safety record, its thriving economy, and the numerous indigent people he has championed, speak for the kind of work he can do. “I’m a humble, shy guy, but I step up when it needs to be done, when things need to be done I don’t shy away,” he said.

The kid who was bullied and teased in school has gone on to help others who need someone to stand up for them. Buenaventura hopes he can continue doing this, as he sits on the bench, working for a more accessible justice system.