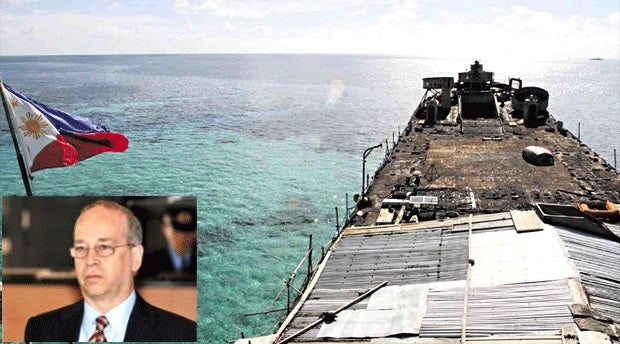 US Assistant Secretary of State Daniel Russel reaffirms his country’ support for the Philippines in its territorial dispute with China. The Philippine flag flies proudly on the deck of the rusting BRP Sierra Madre. AFP and INQUIRER file photos

WASHINGTON—“There should be no doubt about resolve of the United States. We stand by our allies and we stand by our commitments,” Assistant Secretary of State Daniel Russel, the top US diplomat for East Asia, told a Senate panel that oversees policy in the region.

The United States on Thursday cautioned China that it will meet its defense commitments to allies as tensions mount between Manila and Beijing over their territorial dispute in the South China Sea.

Russel told a congressional hearing that some Asian countries fear that Russia’s annexation of Crimea could serve as a precedent for Beijing.

In China’s most recent assertive display, its Coast Guard ships attempted to interdict a Philippine vessel resupplying a small offshore garrison on the BRP Sierra Madre at Ayungin Shoal (Second Thomas Shoal) on the Philippine side of the Spratly archipelago in the South China Sea on March 29.

The Philippines is a US treaty ally and one of several nations with conflicting territorial claims with China over small islands and reefs in the South China Sea, most of which China claims for itself.

Russel said China’s “intimidating steps” toward the Philippines appeared to reflect its “anger and discontent” over the Philippines filing a case at the United Nations arbitral tribunal in The Hague, the Netherlands, on Sunday challenging China’s claims.

“It is incumbent of all the claimants to foreswear intimidation, coercion and other nondiplomatic or extralegal means,” Russel said.

He urged China to clarify its claims in the South China Sea and reiterated US support for a diplomatic solution.

Brunei, Malaysia, Vietnam and Taiwan also have territorial claims in the 3.5-square-kilometer South China Sea, 90 percent of which China insists is part of its territory.

China says its claims in the South China Sea have a solid historic and legal basis although they extend into the 370-km exclusive economic zones of other nations.

It has rejected the Philippine attempt to seek international arbitration, saying they should hold bilateral negotiations instead.

In recent days, China has accused the Philippines of seriously damaging their relations, abusing process and violating international law by filing a case in the UN arbitral tribunal.

The Philippines responded on Friday, reiterating that “arbitration is a peaceful, friendly and a durable settlement mechanism under international law.”

“By going to arbitration, the Philippines has signaled its fidelity to international law,” Foreign Secretary Albert del Rosario said in a statement released a day after the Chinese embassy in Manila issued a nearly 5,000-word statement denouncing the Philippines for proceeding with the arbitration case in the United Nations.

“To recall, we have done so (going for arbitration) primarily to seek clarification of China’s claim of indisputable sovereignty over nearly the entire South China Sea,” Del Rosario said, describing China’s claim as “excessive and expansive.”

“This is in gross violation of international law,” he added.

“With the submission of the Philippine memorial (memorandum) and with the support of the Filipino people, we are defending what is legitimately and rightfully ours,” he said.

Del Rosario said, however, that he could not go into details of the arbitration case, as “the matter is sub judice,” or pending litigation in the UN tribunal.

The Obama administration has struck a more robust tone in recent weeks about China’s behavior, accusing it of incremental steps to change the status quo in disputed areas, also in the East China Sea, where US ally Japan and China are at loggerheads over sovereignty of Japanese-held islands.

Later this month, US President Barack Obama will visit the Philippines on a four-nation trip to revive his administration’s foreign policy shift toward Asia that was partly conceived to counter China’s rise in a region where the United States has long been the predominant military power. Obama will also visit Japan, South Korea and Malaysia.

Russel said Russia’s annexation of Crimea has heightened concern, particularly among some Southeast Asian nations, about the possibility of China “threatening force or other forms of coercion to advance their territorial interests.”

China needs to demonstrate its commitment to peacefully resolving its territorial disputes, he said.

Russel added that China is economically interdependent with the United States and Asian neighbors, and the prospect of the kind of sanctions that have been imposed against Russian banks and government cronies should have a “chilling effect on anyone in China who might contemplate the Crimea annexation as a model.” With a report from Associated Press

US urges ‘restraint’ between Japan, S.Korea

US vows no let-up in Asia focus