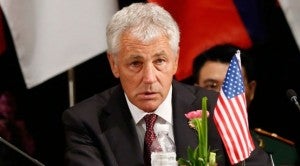 HONOLULU—Southeast Asian defense leaders pointed to Russia’s recent annexation of Ukraine’s Crimean peninsula as one example of why the Pacific nations must be more unified in the face of territorial disputes, US officials said on Thursday at the close of a three-day meeting.

US Defense Secretary Chuck Hagel played host to the three-day gathering of the defense ministers of the Association of Southeast Asian Nations (Asean), largely in an effort to discuss ways the countries can better cooperate and communicate in humanitarian assistance and disaster relief missions.

The Honolulu gathering was the first time the United States has hosted an Asean meeting, and Hagel called it “an important milestone” in America’s effort to put more focus on the Pacific region.

In private sessions, the ministers talked about the ripple effects that such disputes and sovereignty violations can have and noted that there is strength in unity, said the officials, who spoke on condition of anonymity because they weren’t authorized to discuss the talks publicly.

Territorial claims by China in the East and South China seas have escalated tensions in the region, rattling Pacific nations such as Singapore and Malaysia.

Beijing’s recent declaration of an air defense zone over disputed islands controlled by Japan in the East China Sea, and its new rules to regulate fishing in a huge portion of the South China Sea, have deepened concerns that its rise as a regional power could spark a confrontation.

Hagel told reporters on Thursday that one of the ideas the group would pursue was Singapore’s proposal to use its Changi Naval Base as a crisis coordination center.

During the meeting, however, some of the ministers noted the role of the North Atlantic Treaty Organization (Nato) in bringing nations together in the wake of the Crimean annexation, which has triggered economic and other sanctions against Russia.

The officials said that while not all the Asian ministers agreed, the issue fueled conversations about how much the Asia-Pacific nations should work together and how significant a role Asean should play.

Hagel later said that he told the ministers that the United States was “increasingly concerned about the instability arising from the territorial disputes in the South China Sea. The rights of all nations must be respected.”

As part of that effort, the Pentagon has increased US troops and military equipment in the region. And the meeting this week gave Hagel the opportunity to showcase some of his military hardware.

Later, wearing their USS Anchorage ball caps, the ministers saw a number of displays at Joint Base Pearl Harbor-Hickum, including F-22 fighter jets and B-2 and B-52 bombers.

They also climbed aboard a C-17 aircraft that was set up for medical evacuations.

The tours were aimed at getting the ministers more familiar with US military capabilities and how their armed forces might be able to interact or train with American troops in the future.

The meeting came as Pacific nations have joined forces to try to locate the missing Malaysian airliner, and in the wake of the Chilean earthquake that triggered a tsunami advisory for Hawaii this week.

The Pacific Tsunami Warning Center reported only a slight increase in tide levels for the Big Island and Maui.

“Natural disasters and humanitarian crises will be a defining security challenge of the 21st century, not only for Southeast Asia but for the world,” Hagel told reporters after the meeting ended.

“You can expect that the frequency and the complexity of disaster relief and humanitarian assistance missions will increase. These missions demand cooperation between nations,” he said.

Hagel, who will visit China next week, also said America’s so-called pivot to the Pacific is not aimed at China. But he acknowledged the disputes and said he planned to talk to the Chinese leaders about those differences.

“I welcome … the integration of China into global forums, into responsible behavior, play by the international rules of engagement, the code of conduct. I’ll encourage that,” Hagel said.

“I consider the Chinese as friends. We have differences, we are competitors, we disagree in areas, but we’re certainly not enemies,” he added. AP