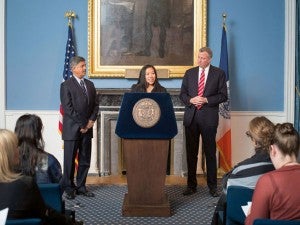 NEW YORK — Maria Torres-Springer is a Filipino-American woman on a mission. Mayor Bill de Blasio a few weeks ago named her the new head of the Department of Small Business Services, pledging to deepen each agency’s connections to neighborhoods across the five boroughs.

“We sought out progressive, proven leaders who are committed to serving diverse communities across this city. And in Maria (and Raju, a fellow appointee), we found them,” said de Blasio.

“Whether it’s deepening our outreach to immigrant entrepreneurs long overlooked by City Hall, or bringing new community health care clinics to low-income neighborhoods, our approach will be the same: We will lift up every community. This will be one city, where everyone rises together,” the mayor added.

A former executive vice president and chief of staff at the New York City Economic Development Corporation, Torres-Springer was a key leader in project teams that helped launch the Applied Sciences Initiative and the redevelopment of Coney Island.

“As the child of immigrants, I understand our city is strongest when every New Yorker has access to quality economic opportunities and good middle class jobs,” said Torres-Springer.

“As Commissioner at the Department of Small Business Services, I look forward to ensuring that every small business owner—no matter where they are from, where they live, or what they look like—has access to the resources they need to succeed,” she added.

Torres-Springer was born and raised in California a year after her parents moved to the United States from the Philippines. Her father, Manuel, is from Pampanga and her mother, Elsa, is from Batangas. She is the second of six siblings (she has four sisters and a brother).

“I come from a very traditional and closely-knit Filipino family,” Torres-Springer told the Asian Journal in an interview days after her appointment.  She says she still speaks a little Tagalog, “but I think my Kapampangan is better,” she quipped.

Married to a Jewish husband, Maria said they are planning to give their children the best of both cultures. “It’s important for me that they both understand their heritage,” she said. She and husband, Jamie, have a four-and-a-half year old daughter and another one on the way.

“There’s nothing I’d love more than for them to experience the Philippines and to meet our family there,” she shared.

“I’m very proud of my ancestry and Filipino culture and my background. I’ve always hoped to take the values that I learned growing up and apply that to my work and I think more generally to insure that people and businesses of diverse background have a fair shot in New York City. If I’m able to do that in this role given my background, that would bring a lot of motivation,” she said.

Torres-Springer’s road to the Department of Small Business Services began when she decided to apply online for a city job. “I have always been passionate to learn about what makes cities thrive. In particular how people’s lives can be improved. So the opportunity to work for government right after graduate school was very attractive to me,” she said. She was hired.

“I wanted to take that leap and fulfill my career to making cities better and improving the lives of the residents. I have been blessed to be able to do that over the course of the past ten years.”

The city’s 200,000 small businesses actually employ more than half of the private sector workforce. Filipino businesses, business that want to expand or operate more effectively, or people who want to start, can check the programs and resources that Torres-Springer’s office has to offer.

“People should take advantage of these programs so they can thrive in New York,” she said.

Torres-Springer has a track record of expanding small business opportunities, and a history of building relationships with community, government and private businesses to support economic development projects.

Her experience collaborating with local communities began when she worked at the Local Initiatives Support Corporation (LISC), a nonprofit focusing on bringing together community organizations and stakeholders with private and public resources to help revitalize neighborhoods based on locally defined priorities.

More recently, she served as the executive vice president and chief of Staff at the New York City Economic Development Corporation, where she oversaw the development and implementation of more than 100 initiatives designed to support innovation and entrepreneurship across all industries.

Torres-Springer worked at City Hall for three years, at EDC for four. Then she left government to work for a non-profit conservancy group, Friends of the Highline.

“Working for both environments have provided me with tremendous opportunities and I was able to learn a lot about what drives entrepreneurship. Small businesses are well served and supported by the government,” she said.

She directed the revitalization of a 27-acre area in Coney Island and created an amusement and entertainment district. She helped spur new applied science and engineering campuses across New York City.

Asked if she has ever felt discriminated against because of her gender and skin color, she replied,  “ I’ve always tried to be very proud of and conscientious of my identities as a woman and as a person of color. But those are not just the things that define me. I’ve been fortunate to have been in places where I feel completely respected by my colleagues. I focus my efforts as a woman, as a person of color, in making sure that I create teams that celebrate inclusion and diversity.”

Maria spent some of her formative years in the Philippines. From age 9 to 13, she lived in Betis, Pampanga, her father’s hometown. She moved back to the States around high school and then she visited a couple of times as an adult. The last time she visited the country was in 2006.

“I miss the food, how much family surrounded us when we were there. My dad is one of 23 kids. He’s the youngest. Being surrounded by family was a very special experience,” Maria said.

Asked what important lessons her parents taught her, Maria replied, “Never take things for granted. Work hard to achieve anything, really. To be grateful.”

“I’ve been fortunate to have had mentors and supporters in my life, professionally and personally. My family has taught me the value of making sure that I am always thankful to those who have helped me and to ensure that I find a way to give back to others who need help,” she added.

Maria grew up at a time when her parents were still trying to adjust to their newfound lives in America. Their story, she said, is typical of the immigrant experience, where parents make a lot of sacrifices to immigrate to the United States with the hope of providing their children a better opportunity.

Torres-Springer saw her parents juggling multiple jobs. Her dad worked in insurance, her mom worked in a bank. They also had small businesses on the side. They had two to three jobs in order to provide for their growing family.

“Everything that I have done or tried to do is formed by that experience. I want to make sure that families of New York have the same opportunities that I had despite the struggles,” she said. “Always think of others. As tough as it is sometimes, I was always taught that there are others who are struggling even more.”

Torres-Springer is the first in her family to get into a US college–Yale, where she majored in ethics, politics and economics. She then went on to receive her master’s in public policy at Harvard University.

“It was definitely a culture change and it was much colder in the east coast. Education was always very much valued in our family. That opportunity, I felt very blessed to have. I knew it was something that I couldn’t squander,” she said.