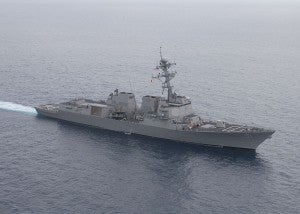 MANILA, Philippines—On this its first visit to the Philippines, the US warship made sure to navigate the waters very carefully.

Arriving a year after the grounding of another US vessel in Palawan, the guided missile destroyer USS Pinckney entered Philippine waters under the tight reins of its officers who are held to “very high standards” to ensure safe and smooth sailing at all times.

“While it was regrettable that the incident happened early last year, we take all possible measures to ensure safe navigation at all times,” said Commander Frank Okata, the Pinckney’s commanding officer, taking questions from reporters.

Okata was referring to the grounding of the USS Guardian, the Avenger-class minesweeper that ran aground on the protected Tubbataha Reef in Palawan on Jan. 17, 2013, destroying some 4,000 square meters of coral.

The Guardian, which was making its way out of Philippine waters at the time, got stuck on the reef and had to be cut to pieces to remove it without causing further damage to the Unesco world heritage site.

Investigation by the US Navy found that poor leadership decisions and planning, among other factors. had led to the accident.

The US has yet to pay the P58 million fine for damaging the reef, saying it was still awaiting a formal request to do so from the Philippine government.

“Navigation is our most fundamental skill as mariners. So we hold ourselves always to our very high standards and, because of this, we are always training and looking at all of our voyage preparations with meticulous detail to prevent any incidents from happening,” Okata said.

The 155-meter 9,300-ton warship docked at Manila’s South Harbor on Friday afternoon for a five-day rest and refueling stop, a routine port visit for US vessels deployed in the Asia Pacific.

It is the second American naval vessel to dock in the Philippines this year, after the missile cruiser USS Shiloh which stopped over in Cebu province on Jan. 31 and stayed for four days.

“We take advantage of this pause in operations to interact with people like yourselves to spread the story about what we do and what our mission is. We also try to restock our supplies, because it’s been a long voyage for us,” said Okata.

The Pinckney took a break after a month at sea, traveling across the Pacific Ocean from its home port of San Diego, California, and conducting training and proficiency exercises on its weapons systems for its crew along the way.

The ship has a complement of some 300 personnel, including at least 10 of Filipino descent.

Among them was Petty Officer Second Class Geraldine Igualdo who brought on board her parents and relatives on her first visit to the Philippines since 2010. The nursing graduate, who followed a cousin into the US Navy, was thankful for the decision she made as a 21-year-old five years ago.

“When I left the Philippines in 2008, I was thinking of just getting permanent status over there (the US). But then I saw their ads and I wanted to join. It’s really a great decision I made, I believe, because I’m here, traveling the world, getting experience and everything,” said Igualdo, who will spend the weekend with her family in Manila.

US warship arriving in Manila Friday