Clowns without borders: Healing with laughter 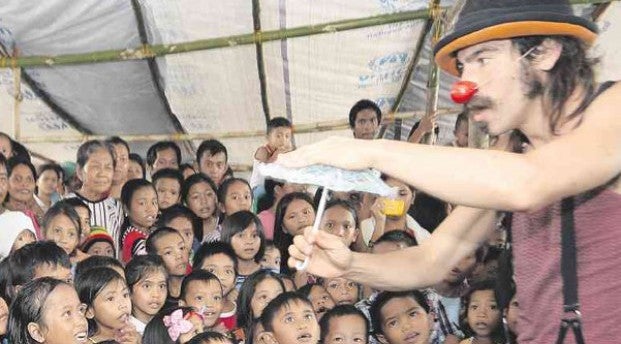 HOLIDAY MAGIC A member of Clowns Without Borders performs in front of young survivors of Supertyphoon “Yolanda” at a tent city in Tacloban City. AFP FILE PHOTO

TACLOBAN CITY—The saying that laughter is the best medicine proves to be a truism even in times of disaster, as it was for survivors of Supertyphoon “Yolanda,” who had a good laugh after witnessing the acts of Clowns Without Borders (CWB), an organization that offers entertainment in crisis situations.

“Clowns Without Borders believes in the power of laughter as a way to relieve suffering,” said Tim Cunningham, director of the CWB.

Cunningham, an American, is a 34-year-old professional clown.

Thirty-seven-year-old Samantha Holdsworth, a CWB member from the United Kingdom, said bringing joy to the children still reeling from the destruction caused by Yolanda would somehow bring a “healing effect.”

“We believe in the healing and the cathartic potential of the art to effect change,” said Holdsworth, a theater director and producer in London.

This belief is validated by the children’s positive response to their performances.

The group first arrived in Eastern Visayas on the third week of December last year, performing in evacuation centers in Basey and in Tacloban, to the wild acclaim of the audience, composed mostly of children.

They also performed in Hernani, Balangkayan and Llorente in Eastern Samar, and in Baybay City and Tolosa in Leyte. They will perform again in Tacloban City on Friday.

Performing with Cunningham and Holdsworth at the Yolanda-hit areas are: Mexican Gabriela Muñoz, 32, a theater clown; and Americans Micael Bagar, 32, a professional clown and Brendon Gawel, 34, a puppeteer.

All five provide laughter to their audience and interact with the children.

For several days now, CWB have been performing in several Yolanda-hit areas in Samar, Eastern Samar, Leyte and Tacloban City, considered the ground zero of the world’s strongest typhoon to make a landfall.

In all their performances done in open spaces, town gymnasiums, schools and evacuation centers, laughter and loud applause from the children were the usual response.

Sixteen-year-old Trisha Cyrelle Candido from Hernani town traveled all the way to Balangkayan, about 64 kilometers away, just to watch the CWB performance on Feb. 2.

“They really made us happy and made us laugh again,” Candido said.

For Camille Calvadores of Salcedo town, watching the CWB was a “mesmerizing experience.”

“It was the first time I ever saw clowns perform. They made us laugh and we were dazzled with their performances, like when they performed their magic act. My thanks to them,” the 11-year old said.

Holdsworth said they find it heartwarming that the children, who may initially show a tentative kind of reception, always give them a robust and warm reception at the end of the show.

“We draw our strength from their smiles. Children loved our acts. I mean, they are excited, playful. They are even talking to us,” she said.

According to Cunningham, the positive reactions they get give them a kind of “high” that makes them give their all in their performances as jesters. It serves as a validation that they have accomplished their mission.

He said the main goal of their group is to ensure that the children, who have been exposed to traumatic events in the wake of the supertyphoon, will be able to laugh again.

Chris Sibugon, communication officer of Plan Philippines, said the CWB members are the “perfect” persons to provide entertainment to children who are still feeling the brunt of the aftereffects of Yolanda.

“We could not think of any other group except Clowns Without Borders. It is necessary to give our children a sort of respite from the Yolanda experience,” Sibugon said.

Gawel and Bogar expressed admiration for the kids who still manage to laugh even after suffering from the devastating impact of the supertyphoon.

“Their resiliency is something,” Gawel said, noting that this has inspired them to keep going despite their physically challenging routines.

Cunningham said Filipino children, just like the children from other countries they have visited, gave them a rousing welcome.

“Laughter among children appears to be universal,” he said.