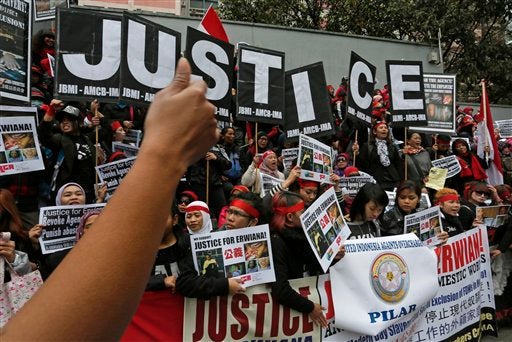 HONG KONG — Hong Kong police said they have arrested a woman accused of beating her Indonesian maid in a case that has triggered outrage over its alleged brutality.

The maid’s case drew attention after photos started circulating among Indonesians in Hong Kong of her injuries, showing the woman’s face, hands and legs covered with scabs and lacerations, and blackened skin around her feet.

A migrant workers’ union in Hong Kong said the maid, who arrived in May last year, was tortured by her employers on a daily basis and forced to wear a diaper.

She was allowed to return to her home country earlier this month after her injuries prevented her from working, and was only given the equivalent of about $9 by her employer, according to the union.

Police released few details of the arrest ahead of a news briefing on Monday evening.

Four Hong Kong police officers headed to Indonesia on Monday to investigate the case. Police also said they received a complaint Sunday from a former maid who also complained of being beaten by the same employer, but it wasn’t clear for which case the employer was arrested.

The arrest came a day after thousands of maids and their supporters protested in Hong Kong over the case, which is the latest to stoke fury over poor treatment of the city’s 312,000 foreign domestic helpers, most of them young women. Indonesians account for about half of Hong Kong’s foreign maids and Filipinos make up most of the rest.

In a similar case last year, a couple was imprisoned for torturing their Indonesian maid with a hot iron, a paper cutter and a bicycle chain.

Amnesty International said in a report in November that foreign maids working in Hong Kong are vulnerable to widespread abuse and exploitation, including restrictions on freedom of movement, physical and sexual violence, lack of food and long working hours.