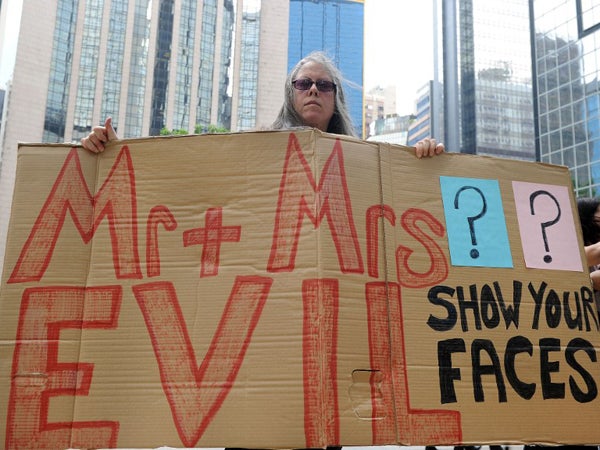 HONG KONG—A Hong Kong couple were jailed Wednesday for a shocking string of attacks on their Indonesian domestic helper, including burning her with an iron and beating her with a bike chain.

Tai Chi-wai, 42, and his 41-year-old wife, Catherine Au, subjected their former maid Kartika Puspitasari to a two-year campaign of violence and humiliation, labeled “cruel” and “inhumane” by the trial judge.

The 30-year-old was also assaulted with clothes hangers and a paper cutter.

Protesters outside court Wednesday held a placard dubbing the couple “Mr. and Mrs. Evil” and called the city to “End the social exclusion of foreign domestic workers in Hong Kong!”

Hong Kong is home to nearly 300,000 maids from mainly Southeast Asian countries, predominantly Indonesia and the Philippines, with growing criticism from rights groups over their treatment.

Judge So Wai-tak, who described the attacks on Puspitasari as “repeated and continual,” sentenced Tai, a salesman by profession, to three years and three months in prison for one count each of assault causing actual bodily harm and wounding.

Au, a hospital assistant, was given five-and-a-half years for two charges of assault causing actual bodily harm and four counts of wounding, three of them with intent.

In a courtroom packed with rights activists, Indonesian migrant workers groups, reporters and representatives from the city’s Indonesian consulate, the judge described the couple as “breaching integrity” and committing a “serious offense.”

But he found them not guilty of a charge of false imprisonment over the allegation that the couple left the maid without food or water after tying her to a chair and forcing her to wear a diaper while they went on five-day vacation.

Both the accused, who had denied all the charges and remained impassive in court, were jailed immediately after the verdict.

“Employers and employees in Hong Kong should resolve differences through patience and tolerance,” So said, adding that the couple’s actions may damage the city’s image as a safe place to work.

“The sentence is too light. The couple did this together,” Sring Atin, vice chairperson of Indonesian Migrant Workers Union, told AFP.

“I hope this is the last time it happens. But the guarantee comes from the government which has to reform its policies to better protect us,” she said.

During the two-year period when she was employed, Puspitasari said that she received no salary, was banned from talking to anyone and could not leave the couples’ residence.

Puspitasari, who worked in Singapore for seven years before coming to Hong Kong, sought refuge at the Indonesian consulate in Hong Kong after fleeing her employers.

The defense had accused her of lying, citing a history of disputes over her wages.

A union representing domestic workers held a protest in March to call for an end to a policy that requires foreign maids to live with their employers, saying the rule exposes them to assault and sexual harassment.

In the same month two Filipino maids lost their bid for permanent residency in Hong Kong after working in the city for more than 20 years.

Other categories of workers from foreign countries can gain permanent residency after seven years.

The standard wage for domestic workers is just under HK$4,000 ($515) a month for a six-day week.—Dennis Chong

Read Next
Activist takes risks fighting for US immigration reform
EDITORS' PICK
Style and music journeys with Claudia Barretto
IATF: Food firms to operate with 50% of workforce during Luzon quarantine
DILG says middle class will also get govt aid during Luzon-wide quarantine
DILG to stranded workers: ‘Stay where you are’ until Luzon-wide quarantine is over
UP-PGH wards for COVID-19 patients finished in 5 days
Cebu City closes its borders
MOST READ
No more bread? Company forced to limit production
Laguna placed under ‘total lockdown’
DOH pressed to expand, speed up virus testing
UP-PGH wards for COVID-19 patients finished in 5 days
Don't miss out on the latest news and information.

Quezon seal borders due to COVID-19