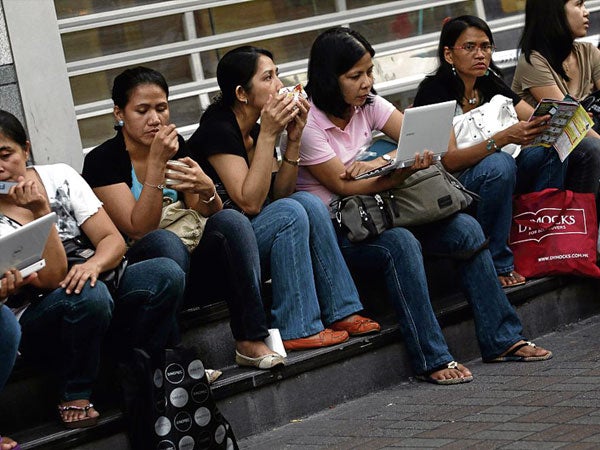 HONG KONG — Domestic workers took to the streets of Hong Kong Thursday, demanding justice for an Indonesian maid allegedly tortured by her employers and better protection for the city’s hundreds of thousands of foreign maids.

Erwiana Sulistyaningsih, 22, was reportedly left unable to walk following eight months of abuse in the southern Chinese city and was admitted to an Indonesian hospital in a critical condition last week after returning home.

Her case is the latest in a spate of abuse claims and has renewed concern about the treatment of domestic helpers in the former British colony following recent criticism by rights groups.

Dozens of protesters including maids, rights activists and migrant group members rallied outside the office of the maid’s employment agency before marching to the city’s Indonesian consulate.

As they marched through the bustling shopping district of Causeway Bay they chanted slogans including “We are workers. We are not slaves. Justice for Erwiana.”

The building where the office is located saw heightened security with its grille lowered down and security refusing to allow the protesters to go upstairs.

“It is not only an issue of her being an Indonesian, but her being a migrant worker and a human being,” Eman Villanueva of the Filipino Migrant Workers’ Union of Hong Kong, told AFP.

“We from the Philippines are also migrant workers. We know the feeling, being away from home and suffering,” Villanueva added.

He called on the Hong Kong government to improve legal protection for maids, and to allow them to choose their own accommodation instead of being required to live with their employers.

Sulistyaningsih remains in hospital in Sragen, on the main Indonesian island of Java.

Her condition is improving and medics hope her injuries will be healed in two weeks, Dita Indah Sari, spokeswoman for the Indonesian minister of manpower and transmigration, told AFP Wednesday.

Hong Kong police said Tuesday they had launched a criminal investigation after migrant worker groups expressed anger at earlier reports that authorities were not pursuing the case.

The semi-autonomous Chinese city is home to nearly 300,000 maids from mainly Southeast Asian countries — predominantly Indonesia and the Philippines — and criticism from rights groups over their treatment is growing.

A Hong Kong couple were jailed in September for attacks on their Indonesian domestic helper, which included burning her with an iron and beatings with a bike chain.

Amnesty International in November condemned the “slavery-like” conditions faced by thousands of Indonesian women who work in the Asian financial hub as domestic staff and accused authorities of “inexcusable” inaction.

It found that Indonesians were exploited by recruitment and placement agencies that seize their documents and charge them excessive fees, with false promises of high salaries and good working conditions.

Maid in Hong Kong, made for discrimination