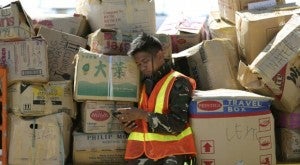 A Filipino soldier takes a break beside relief goods at the Tacloban airport, in central Philippines on Sunday, Dec. 8, 2013. The Red Cross warned against aid dependency in the Philippines Tuesday, Dec. 10, as the United Nations urged donors to double their assistance to millions of victims of the country’s deadliest-ever typhoon. AP FILE PHOTO

The consolidated data by the UN Office for the Coordination of Humanitarian Affairs (UN OCHA) dated Jan. 14 showed that some organizations involved in the distribution of emergency food aid, rice seeds as well as those engaged in cash programs have been experiencing hardships on the field due to increased risks of landslides and floods especially in remote inland and highland areas, said a report released by UN Coordinator to the Philippines Gemma Cortes on Wednesday.

The UN OCHA report said the distribution of food, livelihood and cash assistance to victims of supertyphoon “Yolanda” (Haiyan) temporarily slowed down or were stopped by organizations involved in humanitarian aid to the Visayas due to the moderate to heavy rains brought about by a low pressure area.

The risk of flash floods and landslides has increased in some areas due to land erosion, which might endanger both the responders and beneficiaries, the report added.

The report did not, however, identify the areas at risk to flooding and landslides.

The UN OCHA report said response operations would return to normal upon improvement in weather conditions.

The UN and organizations involved in humanitarian efforts would continue emergency food-aid distributions until the next rice-production season in May 2014, the report said.

UN OCHA emphasized that remote inland and highland areas should be prioritized because some farmers whose crops were destroyed by Yolanda have not received assistance yet.

The UN body also reported some affected people in “underserved areas,” which were not specified in the report, walk up to half a day to access assistance given by organizations.

Some 33 million trees were damaged in Region 8, which affected coconut farmers who lost a livelihood, which would have fed them for the next six to nine years.

Sixty-five percent fishing communities in Eastern Visayas lost their productivity when the typhoon destroyed 28,000 fishing boats, most of them owned by small scale fishers, the UN OCHA report said.

The UN food and livelihood sector has also been supporting income generation through cash programs and alternative livelihoods strategies, such as vegetable, pig and poultry farming.

Initial data gathered by UN OCHA suggested that the fishery and coconut plantation-related interventions have remained underserved, which led its international and Philippine partners like the Department of Social Welfare and Development (DSWD) to jointly develop comprehensive strategies for coconut farmers and fisheries.

In a previous interview, Cortes told the Inquirer that the UN intended to stay in the Philippines for at least six months since Yolanda struck the country on Nov. 8, 2013 or until such time that rehabilitation efforts produce considerable changes in the lives of the typhoon victims.