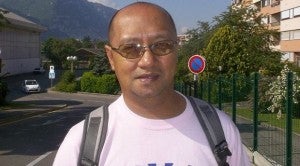 MANILA, Philippines – A migrant workers’ group slammed the Department of Labor and Employment (DOLE) for its move to allow foreign workers into the local labor market saying it was “insulting to millions of overseas Filipino workers (OFWs).”

“It is simply so wrong on so many levels we were rendered speechless for a second. There is a plethora of reasons on why this move is untimely, if not downright delusional,” Garry Martinez, Migrante International chairperson, said in a statement.

“That the DOLE even has the audacity to announce such a thing is absurd, atrocious and awfully insulting to millions of our Filipino workers and professionals here and abroad,” he said.

DOLE secretary Rosalinda Baldoz has announced that the government will allow foreign workers for at least 15 jobs that have a shortage of skilled workers.

Baldoz said that they are looking to “liberalize the labor market and allow entry of foreign workers with the required skills so we can fill up those hard to fill occupations due to shortage.”

Martinez however said that the government has not done enough to keep Filipino workers from looking for better salaries in work in other countries.

It also cited a study by IBON Foundation saying that underemployment has reached 7.5 million in 2012, a significant increase of 349,000 from 2011.

“However, what it fails to mention is that the jobs created were either short-term, contractual, and highly disproportional to the ever-growing labor force,” he said.

The number of deployed OFWs has also been continuously increasing over the past years and said that the Aquino administration has deployed the highest number of Filipinos abroad.

“This figure can only be attributed to the Aquino government’s more aggressive labor export policy that thrives on Filipino workers and professionals’ desperation. Last year, the government deployed 2 million OFWs and professionals abroad, the biggest in history,” Martinez said.

“So again, how can the DOLE stomach this absurdity? How can they say that there is a shortage of job applicants when it is the government itself that is forcing and peddling a huge number of our skilled workers to foreign shores?” he said.

To address the issue of Filipinos looking for jobs abroad, Migrante urged the government to improve national industries and agriculture.

Motorcyclist accompanies bike-riding fiancé to work from Cavite to Makati