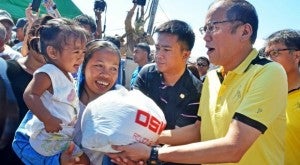 A survivor of “Yolanda” breaks into a smile of relief as she welcomes a care package from President Aquino at the Palo municipal hall in Leyte province. FILE PHOTO

It’s unheard of in international humanitarian circles: Communities either flattened or swept away by one of the world’s strongest typhoons, losing their loved ones and most everything they own, are rebuilding their homes and going  back to work, eager to start anew just two months after the disaster.

To Yuri Afanasiev, senior recovery coordinator of the United Nations Development Program (UNDP), the speed by which people in the communities ravaged by Supertyphoon “Yolanda” (international name: Haiyan) on Nov. 8 last year are recovering is encouraging.

“We have never seen a recovery happen so quick. And many of us have been in many different disasters,” Afanasiev said.

Afanasiev, the UNDP resident representative in Bosnia and Herzegovina, is leading his agency’s early recovery mission in the communities destroyed by Yolanda in central Philippines.

He flew to the Philippines as part of the United Nations’ “surge” or rapid deployment of specialized personnel for major emergencies.

Yolanda is one of four Level 3 emergencies in the world, the highest in the UN disaster scale. The others are the humanitarian crises spurred by conflict in South Sudan, the Central African Republic and Syria.

“For the UNDP to be speaking to you about ongoing field early recovery operations essentially at the end of the second month is unheard of,” Afanasiev told the Inquirer in an interview on Friday.

“In the Asian tsunami, the humanitarian phase lasted for three to four months. Here, we are already talking about an end to the humanitarian phase in month two,” said Afanasiev, who was also the UNDP’s point man for early recovery operations in Thailand, Indonesia and Sri Lanka after the Banda Aceh earthquake that generated a tsunami that killed more than 200,000 people on the Indian Ocean rim.

Afanasiev spoke to the Inquirer as the United Nations, the government and other partner organizations began the gradual shift from the emergency or humanitarian phase to the early recovery phase, a progression of sorts from giving survivors fish to teaching them how to fish.

Humanitarian workers here are already looking at ending the emergency relief period— the distribution of food, water and emergency shelter, like tents and plastic sheeting— and have begun phasing in early recovery activities, or efforts to restabilize communities through livelihood and cash-for-work programs, support for public services, like health and education, and shelter reconstruction.

For Afanasiev, what has driven the immediate shift is the will of the survivors themselves—people picking up from where life left them off, proving that survival comes naturally for the Filipino.

“The Philippines is a very special country. It experiences these disasters every year. So in many ways it’s one of the most prepared countries in the world,” Afanasiev said.

“Secondly, I have never seen a people so resilient, so positive, matter of factly getting on with the recovery on their own, frequently in a self-organized fashion, without anybody else organizing them. I have truly come to admire the regular people in the villages, in the cities and towns, and how they just recover and get on with their lives,” he said.

The show of a uniquely Filipino fighting spirit, so admired in the international community, has provided a backdrop of positivity and cooperation that eased the flow of help into the affected communities.

“It is amazing how people on the streets are smiling and coming up to us and saying, you know, ‘Thank you very much for your help.’ There is no animosity, there is no anger, there are no bad feelings, which makes working in a recovery situation like this that much easier,” Afanasiev said.

“We don’t have lack of water or sanitation in the humanitarian sense. The life-saving functions have been provided collectively by the government, the military, by the United Nations, by nongovernment organizations, by the international community and everybody else,” he said.

Despite the difficulty in reaching remote islands in the early part of the response, Afanasiev commended the restoration of transport systems within the second week of the humanitarian operation.

“Ferries started going in the second week, planes started flying two weeks later and remarkably today it’s not a problem, so you can access most of the areas … Access was not a problem and we were pleasantly surprised at how quickly the transportation sector reengaged in the Philippines,” he said.

The UNDP, among 14 UN agencies supporting post-Yolanda recovery efforts in the Visayas, is implementing a $47-million (around P2 billion) yearlong recovery program for the Philippines under the world body’s $791-million (P34.8 billion) Strategic Response Plan.

For the $47 million, the UNDP is looking to donors to fill a funding gap of $33.7 million.

The program aims to introduce recovery activities on the ground to establish a “bridge from early recovery to rehabilitation while creating conditions for resilience-building and long-term recovery,” the agency said in its latest report.

Among the UNDP’s priority interventions, Afanasiev said, is providing assistance to local governments, including technical support through engineers, planners and other experts to back municipal administrations virtually stripped bare of resources by Yolanda.

The agency is also on top of efforts to introduce cash-for-work programs in affected towns, including debris clearing, cleanup and repair, that provide income to typhoon survivors while at the same time supporting the physical rehabilitation of disaster-stricken villages.

So far, the UNDP has employed some 15,000 workers in cash-for-work activities in 600 villages in some of the hardest-hit areas, including the cities of Tacloban, Roxas and Ormoc, and the towns of Palo in Leyte province, and Guiuan, Marabut, Giporlos and Hernani in Samar province.

Afanasiev said the UNDP planned to hire 20,000 more this month and another 20,000 in February, with the overall target of 160,000 beneficiaries in 43 selected municipalities throughout this year.

He said the agency also aimed to support livelihood for the workforce, including fishermen whose boats were either lost or damaged in the typhoon, and farmers who were hoping to replant the land to ensure income by harvest time.

The UNDP is also pursuing the possible use of felled coconut trees for rebuilding shelters and as alternative livelihood for survivors.

With the Philippines among the world’s most vulnerable to natural disasters, Afanasiev said the UNDP would also work with the government to make sure that communities are better prepared for calamities, though he commended the level of the government disaster preparedness and response capabilities.

“I think we need to together take a look at what went right, because a lot of things went right. The Philippines is better prepared than most countries in the world,” Afanasiev said.

“But some things went wrong and we need to together understand and agree on what went wrong, which caused loss of life, and how we can avoid it in the future, because inevitably these things will repeat themselves, how to build back better and how to build resilience into our structures, our communities, our recovery efforts,” he said.

Among areas that should be looked at are increasing public awareness of disaster preparedness, improving early-warning systems and decision making on evacuations and the prepositioning of relief supplies, he said.

“I think all these issues need to be looked at again for the simple reason that the Philippines is going to experience this again. It’s not a question of if [but] when,” he said.