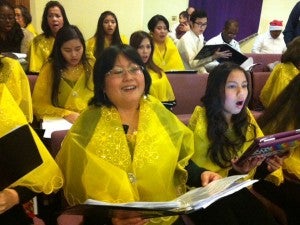 SAN FERNANDO VALLEY, California—Many Filipino expatriates bring with them cherished Christmas memories from home by celebrating  “Simbang Gabi” in this area of Los Angeles County that is home to tens of thousands of Filipinos.

The Archdiocese of Los Angeles bolstered this important commemoration by supporting local parishes as they simultaneously hold Simbang Gabi Mass every day from December 15 throughout Los Angeles County. Now, even non-Filipinos are embracing the tradition.

The event is a nine-day religious rite focused on the Filipino tradition of celebrating the birth of Christ in a colorful display of native costumes, Christmas songs in churches and the display of the symbol of hope and faith for many—the Christmas lantern or “parol.”

There were already nearly 30,000 Filipinos residing in the San Fernando Valley even ten years ago, so one is assured of a “Simbang Gabi” any day of the week leading to Christmas.  Some Masses are held at break of dawn in some parishes and in others, the evening after work.  Mass is often followed by a complimentary feast of sumptuous Filipino food.

“Simbang Gabi allows me to understand my roots and traditions as a Filipino,” said Jonathan Soriano, a second generation Filipino and musical director of the St. Jane Frances de Chantal church. “It allows me to prepare to commemorate the birth of Christ  in the way my relatives of generations have done before me; how my parents celebrated Simbang Gabi back in the Philippines.”

Soriano’s parish for more than 20 years has joined about two dozen churches in the area in making “Simbang Gabi” not only a Filipino tradition, but one generously shared with the rest of the diverse communities.

On Saturday December 21,  “Simbang Gabi” opened at this parish of 65 percent Filipino Americans with a procession of the  star-shaped “parol,” blessed the week before by Archbishop Jose Gomez at the Cathedral of Los Angeles with those of other Filipino organizations, civic and professional organizations in the city.

A multitude of families wearing the iconic “barongs” listened to the homily by the pastor, Fr. Kevin Laffey (O. Carm) not only about the Nativity, but also about the significance of “parol” in the center stage of the festivities.

He said the Philippines’ parol is to Filipinos a symbol of hope just as the statue of the “posadas” ( Mary and Joseph finding an inn)  is to the Hispanic community.   Fr. Laffey, paused to remember the victims of Haiyan and their families and reminded the community to help in every way they can amidst the celebration away from the country.

A hit with younger generation

While the entire event may be a traditional commemoration, it has a cultural significance with the younger generation, many having attended the Mass since they were elementary 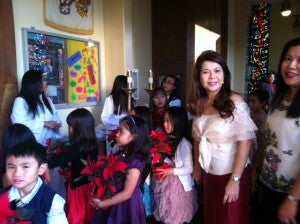 students of the parish school.

“It’s fun to grow up keeping with my mom’s tradition even though I’m no longer with this school,” said Myra Ramos, who is now in college but comes back for “Simbang Gabi.”  She associates good Filipino food such as lumpia and pancit with the religious offering.

Meanwhile, Jon Soriano who has directed the choir for 16 years, explained how much his musical interests are closely tied into the “Simbang Gabi.”

“I feel very involved with the songs of “Simbang Gabi” when they are sung.   As I research and select songs for the year’s repertoire, I have to do a little more studying because I have to learn and understand the translations of the Tagalog lyrics. That is where I develop a deeper meaning of the music. And it is not just limited to the lyrics but also in learning about the composers and the era when their music was written.”

He said the younger members of the choir have enjoyed the cultural bridge lent by a bilingual mass (English-Tagalog) at the multicultural parish.

This year’s coordinator for Simbang gabi, Ruby Minosa, a medical doctor from Lakeside Hospital, emotionally states that “Simbang Gabi is my way to the Lord.” Minosa said he collaborates with fellow directors in the San Fernando area.

“We use Simbang Gabi music that is traditional in the Philippines as well as new contemporary music.  We want the celebration to be relevant to all worshippers.” They begin practicing for Simbang Gabi as early as November.

“I also reach out to people outside of our Choir to join in the celebration,” she said. Together with co-chair Arlene Zapanta and committee members, the group has raised funds through a casino trip and personal donations to support the novena and dinner.

One of the cantors, Tess Ventura, has sung for Simbang Gabi since she was eight in the Philippines and now has been singing in the St. Jane’s choir for ten years.

“The lyrics are usually in Tagalog and our Parish may not know the language. But praying through the song unites us with the non-Filipinos. It seems that our churchgoers have embraced this tradition as part of their faith.” Venture noted.

Read Next
5,000 gain from UNDP job scheme
EDITORS' PICK
SMDC The Good Guys on the Go
WHO resumes hydroxychloroquine coronavirus trials
COOCAA TV Bounce Back Sale offers up to 50% off
Cherry Mobile teams up with Cloud Panda PH, launches online store
Over P785M distributed to 98K PUV drivers in Metro Manila — DSWD
DOLE eyeing P20-B subsidy for MSMEs
MOST READ
Philippines’ youngest survivor of COVID-19 dies
It’s final: Anti-Terror Bill now only needs Duterte’s signature
Piolo gets first call slip from ABS-CBN to resume ‘ASAP’ taping
‘She had no right to be in Singapore’: Youth pleads guilty to abusing Filipino maid
Don't miss out on the latest news and information.