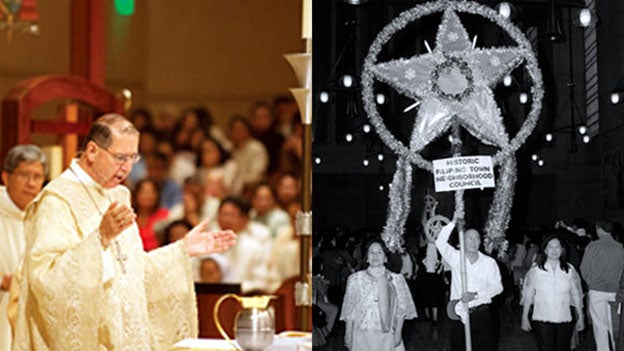 LOS ANGELES—Living in an area with relatively few Filipinos, compared with West Covina, it took me a while to find a church that offers Simbang Gabi every morning during Christmas season. When I finally found one at St. Stephen Church in Monterey Park, I was disappointed to see that there were barely any cars in the parking lot. I was not even sure if the church was open. http://www.the-tidings.com/index.php/news/newslocal/4033-simbang-gabi-parish-celebrations-begin-dec-15
[1]

Inside, half of the pews were empty and there were almost no young adults present. But when everyone started singing the songs[2]  that I used to know, I could not help but get into the spirit of the season. It may not exactly be the way I had envisioned Simbang Gabi in the US but in the middle of singing “Ama Namin” in my raspy morning voice, it brought back wonderful memories of home.

Growing up in the Philippines, I used to live a stone’s throw away from the church. Not only did I hear the church bells ringing before and after Mass, but I also saw the flow of people coming out of the church. From my window I could see if a lot of people of attended Mass or not.

When it was time for Simbang Gabi, I would wake up at 3:30 in the morning because I had to get to the church early as an altar server. There were plenty of chores, like lighting up the incense and making sure the charcoals were hot enough in time for the processional. I also had to make sure to have an extra set of matches in case the candles snuffed out in the middle of the ceremony. And back when we did not have our own set of vestments, I had to get to the church as soon as possible to make sure that I did not get a sutana that was twice my size.

Once I stepped out of the metal gates of my home, I would see droves of people walking in groups towards the church. Some of them were fellow altar servers and neighbors while others were unfamiliar faces visiting from other barangays. If we were lucky, we would be walking through a thin layer of fog, temporarily turning the scene into a semblance of London with the church tower as the Big Ben. Whenever this happens in the usually humid streets of Quezon City, I secretly smiled on the inside because I knew, “Malapit na mag-Pasko.”

I noticed that compared with the evenings here in Los Angeles, nights in the Philippines seemed darker. There were no streaks of purple or white in the sky, just plain black. But I realized that when I got to the church and finally saw the annual Christmas decorations arranged beautifully on the church façade, the darker skies helped the lights shine brighter.

As I walked towards the sacristy to get changed into my altar attire, I would usually start to gauge the amount of people attending the service. If I got there 20 to 30 minutes before the Mass and it was already standing room at the back, I knew the service would go for at least an hour and a half. I also knew that the crowd would thin significantly especially during the 4th or 5th day of the novena.

Filipino Catholics, I must admit, were usually present only in the first or the last day of Simbang Gabi. Others might be more motivated to get up early every day if they knew that there was free food afterwards.

In my early days attending the Simbang Gabi, I had somewhat adolescent wishes that I prayed would come true. I remember one year, I sincerely prayed that on the last day of the novena, my celebrity crush, the one and only “Pantasya ng Bayan,” Joyce Jimenez, would somehow visit my parish and hear Mass on Christmas Eve.

I know. Don’t judge my 13-year-old self, because I received enough flak from my grade school friends for not only crushing on a former sexy star, but also for

expecting her to arrive with a bow tie during my favorite holiday of the year.

But remembering all these things now, it is wonderful to look back and reminisce on all the good times that I had preparing for Christmas back in the Philippines. Now that I live in the US, at least for the time being, it is quite interesting to see how people try to get into the spirit of loving and giving. Some people bicker about whether Santa is actually a white person, while others simply treat it just like a regular day, maybe plan a trip to Vegas or something. But to me, the magic of Christmas remains alive, whether in my homeland or not.