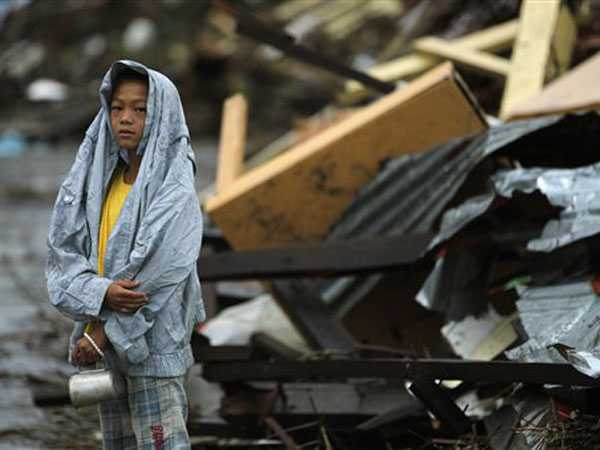 A young boy waits at the side of the road for fresh water surrounded by debris from Typhoon Haiyan in Tacloban, central Philippines, Tuesday, Nov. 12, 2013. AP FILE PHOTO

MANILA, Philippines—As communications facilities are gradually being restored, typhoon survivors enlisted in cash-for-work projects will now be able to receive salary advisories through their mobile phones and get the money through ATM banking services.

The United Nations Development Programme (UNDP) on Monday announced the start of a mobile cash transfer system in the emergency employment programs initiated by the government, the UN and civil society organizations in a bid to help victims of Supertyphoon “Yolanda” back on their feet.

Initiated through a partnership with Land Bank of the Philippines and Smart Communications, the UNDP payment system is expected to reach 5,000 beneficiaries initially and up to 50,000 over time.

“This is a cash transfer system through cell phones that will make cash-for-work payments safer and faster. It will help us better assist the families,” Rebeca Grynspan, UNDP associate administrator said in a statement.

Under the system, UNDP will deposit cash-for-work payroll funds to Landbank. Smart would then notify those employed through text that they may now claim their pay via ATM.

For some locals, the launch of the phone-based cash transfer system will be their first time to experience any form of banking service, said Luiza Carvalho, the UNDP resident representative in the Philippines and concurrent UN humanitarian coordinator.

“This mobile cash transfer system provides access to financial services among the poor and vulnerable who have not been using banks at all,” Carvalho said.

“The mobile cash transfers will speed up the recovery effort as it will align emergency employment cash-for-work programs with the national DSWD activities,” she added.

In the first phase of the program, beneficiaries employed in cash-for-work projects will each receive a mobile phone set with a SIM card and a P30 load, along with a Landbank ATM cash card with which they could withdraw their salaries.

The mobile phone payment system will be introduced in Roxas, Guiuan and Ormoc in the new year, UNDP said.

The program is deemed critical as the government along with UN agencies phase in early recovery efforts in Tacloban City and other Eastern Visayas provinces devastated by the Nov. 8 monster typhoon.

Through the cash-for-work scheme spearheaded by the Department of Social Welfare and Development, typhoon survivors are hired in clearing debris from roads, public buildings, schools and hospitals.

“The active role of UNDP and other international humanitarian organizations have hastened the relief and recovery efforts of the government. With the use of the massive payout network of the Land Bank of the Philippines coupled with Smart’s extensive telecommunications infrastructure and mobile money platform capability, we are confident that we can deliver what is expected of us in terms of service reliability,” said Landbank president and CEO Gilda Pico.

The International Labour Organization (ILO) has tapped private sector partners to provide safety gear to those working in disaster-stricken communities.

“Putting money in their pocket to support their families is one thing. However, as these workers start clearing and rebuilding their communities, we need to ensure that they are given personal protective equipment,” said Lawrence Jeff Johnson of the ILO Country Office for the Philippines.

“In this disaster, there has been a significant loss of lives and livelihoods. We don’t want these workers to fall victims again of work-related illnesses or accidents,” Johnson added.

Yolanda affected some 14 million people across Eastern Visayas, made around 4 million homeless and killed more than 6,000.