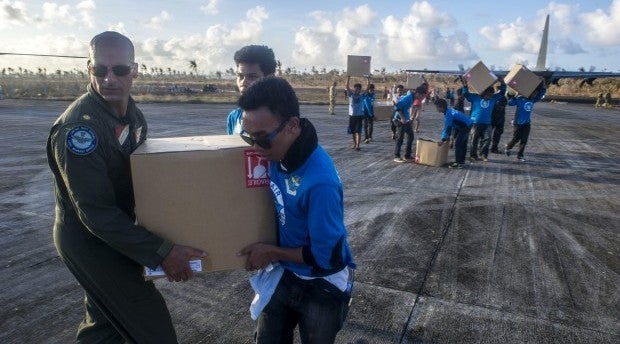 Survivors of Supertyphoon “Yolanda” are matching with initiative and diligence every donor dollar given to them.

Helping the Philippines pays back big time as survivors themselves drive the response and early recovery efforts on the ground, putting their lives back together little by little every day, said Luiza Carvalho, the UN resident humanitarian coordinator in the country.

Carvalho said such level of engagement on the ground should inspire the world to continue supporting typhoon-ravaged villages as the Philippines, the United Nations and other partners ease the transition from emergency relief to the long-term recovery and rehabilitation phase.

Indeed, throughout the effort, one invaluable resource has emerged: the typhoon-hit residents themselves who are battling great odds to survive instead of remaining tragic victims.

“In the Philippines, it’s a worthwhile investment because of this resilience aspect and the role they (survivors) play. It’s a resource that really pays,” Carvalho told the Inquirer in an interview.

“It really pushes the response very fast and further. Every dollar you invest in the Philippines, it pays back because of the capacity of the community to expand the foreign aid. They do have a very fast and strong engagement in the response,” said Carvalho, who has traveled to the disaster areas at least five times since the emergency.

She called on the international community anew to continue its support as the government prepared for the four-year Reconstruction Assistance on Yolanda (RAY), a “build back better” plan for new shelters, major infrastructure, education, health and agriculture facilities and systems, among many others, in the affected areas.

“Do not stop in the next two, three months, we have to keep the momentum,” Carvalho said, addressing donors.

“We and the government will be giving accounts of the progress in a very detailed and timely manner periodically so the help will flow and push into the second phase, and we can rebuild the whole communities,” she said, assuring accountability for donations.

The United Nations supports the RAY program through its Strategic Response Plan, a $791-million appeal to provide immediate needs and begin early recovery efforts for some 14 million people affected by the storm.

Carvalho said donations from foreign governments, organizations and private citizens had filled more than 30 percent of this amount.

She said the amount had accomplished more than expected as typhoon survivors—those who have loved ones, livelihood and homes—just did not wait idly by.

“It’s amazing what we have been able to do with only 30 percent funded,” Carvalho said, who started her tour in the Philippines just a month before Typhoon “Pablo” hit Mindanao in December last year.

“When they (government and the UN Development Programme) cleared the roads, the next day, the roads were full again with secondary debris that people were taking out of their houses. So they were not just waiting and sitting on the road. They started getting the debris themselves and cleaned them out,” said Carvalho, smiling as she recalled the story of Pablo.

She said roads had to be cleared again of the secondary debris several times as residents cleaned out their homes and salvaged what remained.

“So what this does, this leads to prevention of health issues, the security of the family increases, [they have] less exposure to the element … better storage of food, so it’s one thing connected to the other,” Carvalho said.

“People just don’t wait for help. They really start to organize their life and do their best,” she said in the interview in her Makati office.

The United Nations is currently looking at maintaining food aid distribution to families affected by Yolanda until March, as the focus now shifts to establishing more lasting interventions to restore food security. This includes providing seeds and equipment to farmers, reopening markets and ensuring the stability of prices of basic goods in affected areas.

“It’s a matter of moving from food distribution to food security, meaning they should have earnings, markets should be in place, prices should be controlled and protection should be activated,” Carvalho said.

She said seeds were provided to rice farmers in 171 municipalities along the “Yolanda corridor,” and they are expected to harvest some 33,000 metric tons of rice by April of next year. This supply is enough to feed 600,000 people over a year, the official said.

Cash-for-work programs are also in place to provide livelihood to survivors and encourage economic activity anew.

She said the United Nations and the government were looking at focusing food provision to vulnerable populations—undernourished children, pregnant women and breastfeeding mothers—after March, when better a food security structure will have been established.

Carvalho commended how well the government had been implementing the “cluster approach” to disaster response, a system introduced in 2005 targeting specific sectoral needs, such as shelter, health and education. She said each Cabinet secretary had coordinated well with the UN agencies involved.

“They are the the ones who do the magic. They really deliver,” she said.