‘Yolanda has not shaken our faith’ 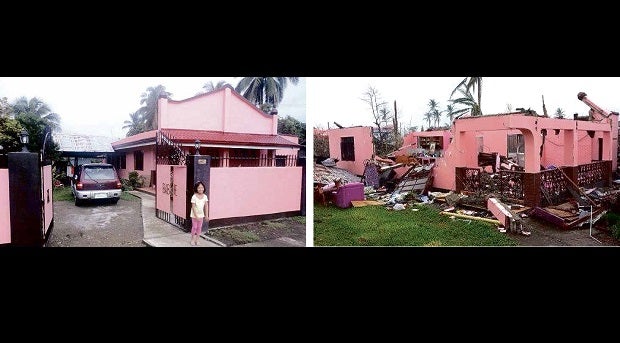 LITTLE Mary Aguillon, whose parents work in Saudi Arabia, stands outside the newly renovated family home before Supertyphoon “Yolanda” struck on Nov. 8 (left). Only a few walls and beams were left standing after the storm.

JEDDAH—A few weeks before Supertyphoon “Yolanda” struck, the family of Melga Aguillon-Gorillo had already set up their Christmas tree in the living room of their newly renovated home in Burauen, Leyte. As it had been in the past, their children—11-year-old Ameerah Mae and Mary, 10—looked forward to the joy of celebrating Christ’s nativity with their maternal grandmother and other relatives, with whom they have been living while their parents are working in Saudi Arabia.

When the supertyphoon struck, devastating mainly the provinces of Leyte and Samar on Nov. 8, the concrete house of the Aguillon family was destroyed. Only a few posts, beams and parts of the walls  were left standing.

“My mother was looking forward to preparing her favorite dishes, especially suman latik and lechon. Here in Jeddah, we look forward to chatting with them on Christmas Day and with our relatives in other countries,” said Melga in an interview in Jeddah.

“Now, much of the excitement and expectations are gone. We only hope that our house could be repaired in time for Christmas so that they can celebrate Christmas Eve there and share whatever food they can prepare for noche buena. We also hope that the electricity in our home will be restored before Christmas, along with the communication lines, so that we can still chat with our children, my mother and my siblings on Christmas day.”

Melga said the family had told her by mobile phone that the town fiesta went ahead (on Dec. 7 and 8) with the two children joining the festivities.

Despite the tragedy, Melga and her husband Cleo, whose family’s home in Villaba, in another part of Leyte, was stripped of its roof, were thankful that their children and relatives were not among those who died in the typhoon.  Aside from their home, Melga’s family lost an Internet café, a store and a school canteen, all of which earned for the family roughly P3,000 a day. Cleo’s family lost a rice mill. Only their car in Burauen,  which the family had kept in a safer place before the typhoon came, was spared. 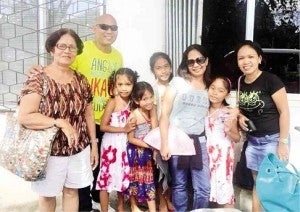 “We are thankful that no one in our families died, although some were hurt. Properties can be restored, but you can’t restore life,” said Cleo in an interview before he left for Leyte on Dec. 1 to assess the situation and help in the rebuilding process.

“Our children are currently staying with their aunt in another house. We want them to return home for Christmas and spend noche buena there. We want to assure our children that everything will be okay.”

The horror which their children and the Aguillon family experienced at the height of the typhoon will linger in their memories for the rest of their lives. The family did not leave their home, thinking that it could withstand the storm because it was made of concrete, “They were at home when Supertyphoon Yolanda came and only sought refuge at a neighbor’s house when they saw that the house was giving way,” said Melga.

“My mother said a tornado hit the house, which sent canned goods flying and nearly sucked them in as well.  The children said they prayed hard during the storm. One of my children told us that while the storm was battering their home, she overheard her seven-year-old cousin praying, “Mama Mary, please help us.”

At around 2 a.m, the family and others in the neighborhood climbed a nearby hill when they heard an announcement that a tsunami might follow.

In Jeddah, the Gorillo couple, who are devout Catholics, also prayed as the storm crossed the Visayas. “It was a harrowing experience thinking whether or not they were safe, although we clung to our faith that they were. Our worries were only eased the following day when a cousin in Dumaguete called up to tell us that our family was safe. But our anxiety had remained until we were able to communicate directly with the family,” said Melga.

Melga said she got worried when she learned from her mother that her sister was hospitalized for a fracture after a glass window panel fell on her foot as they were moving out of the house. “That was the first time I talked to my mother and eldest sister who were distraught that we had lost our home.  My mother was crying on the phone, recalling that the house was newly renovated and the appliances were new,” she said.

“My mother had just retired as a public school teacher and had used her retirement money to renovate the house and buy the new appliances. Cleo and I had also talked to our children who told us that they were so afraid when they saw corpses on the streets while they were on their way to a private hospital in Ormoc City, where my sister was brought for surgery on her tendon,” Melga added.

In Villaba, where Cleo’s family lives, his sister also had to undergo surgery on her right foot which was pinned by a heavy wooden beam at the height of the typhoon.

Christmas in a tent

In Basey, Samar, the parents and siblings of Judith Gacillos-Arciaga, another Saudi-based OFW, are currently living in a tent and on dole from the government and relief agencies.

“My family and other people there lost not only their homes but also their livelihood. The coconut trees and the bancas (small fishing boats) were swept away,” said Judith, who is in Jeddah with her husband Randy Rey and their son John Rey.

And yet, she was confident that her family and the other people in Basey could cope. They were a sturdy lot and were used to hardships, she said. But she said celebrating Christmas was a problem because, besides being dependent on relief goods for their daily meals, “there was no electricity there and it was so dark at night.”

When Melga learned that her family was safe, she joined an online fundraising group called  “Tindog Burauen (Rise up Burauen) to help people in their town who were more severely affected by the typhoon. The group was organized by Filipinos working abroad. “I sought the help of our relatives back home and in other countries. I sent messages through Facebook and in two days I received 2,000 (Saudi) riyals (about P22,000) from colleagues and friends for my sister’s operation.”

Melga said she has been communicating with her husband by mobile phone since he returned  to Leyte in the first week of December. He has told her that he has started repairs on their home in Bureuen from the donations they had received. But she said her family has a hard time looking for materials because prices have soared.

“As of now, we have received more than P80,000. A large part of the donations came from relatives working in Qatar, the United States, Dubai, Thailand and Haiti; from doctors and colleagues at Magrabi Hospital and Eye Center where I used to work; from coworkers at the Albir Kidney Center, where I now work; and from my husband’s co-workers,” said Melga in mid-December.

“Some of the donations came from other nationals and people we did not even know. One donation I want to mention came  from a Filipino in Riyadh. He sent the money to my brother by Western Union. I will not mention how much he sent, but it was so touching because he was a complete stranger.  I traced him on Facebook and thanked him,” she said.

For the Gorillos, although Christmas will not be the same this year, the traditional Christmas tree will still rise in their parents’ homes in Burauen and in Villaba, and in their rented home in Jeddah.

“We will celebrate just the same. The tragedy has not shaken our faith. We know that God will provide. Our faith will remain steadfast as ever,” Melga said.