Kidnapped in Sabah, freed in Sulu 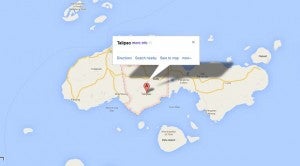 TAIPEI—A Taiwanese tourist who was kidnapped more than a month ago at a Malaysian island resort returned to Taiwan on Saturday after she was rescued in Sulu on Friday.

Television footage showed Evelyn Chang, 58, dressed in a loose T-shirt and wearing sunglasses, walking to a minibus parked at an airport near Taipei after she arrived in the early afternoon, waving briefly to the media and giving a thumbs-up sign.

Local media said she was expected to go to a hospital in Taipei for medical checkups later in the day.

Chang was found by Philippine Marines in Sitio Kanja Amil in Liban village in Talipao, a town on the remote island of Jolo where al-Qaida-linked Abu Sayyaf Islamic militants are known to operate, after they were tipped off by local residents, said Sulu provincial commander Col. Jose Cenabre.

She was taken to a local military hospital for a medical checkup on Friday.

“I think I just want to say I deeply appreciate the Philippine military for giving me such big help and assistance to rescue me. Thank you very much,” Chang said in a prerecorded message aired by several Taiwanese news channels on Saturday.

Chang and her husband Hsu Li-min were on a holiday on Pom Pom Island in Sabah state, which is near the Sulu island group, when gunmen attacked on Nov. 15, kidnapping her and killing her husband, according to Taiwanese officials and media.

Cenabre said Chang broke down in tears as she recounted her ordeal. She told Filipino authorities she did not see her husband being shot but heard gunfire as he was being dragged away by kidnappers who wore ski masks, the provincial military commander said.

Foreign ministry officials in Taiwan said Hsu’s body was cremated in Malaysia and that his family brought back his ashes to Taiwan last month.

Chang was held by Abu Sayyaf militants after she was handed over to them by the gang who initially seized her, Cenabre said.

“We were able to recover her safely,” he said. “Physically, she was all right.”

Taiwanese media said Chang’s family allegedly paid the kidnappers around $300,000 in ransom to secure her release.

But Cenabre denied knowledge of such ransom.

Philippine authorities said the identities of Chang’s kidnappers were unknown, although Abu Sayyaf gunmen who are known to carry out kidnappings operate in the area.

A Jordanian television reporter, Baker Atyani, walked free from a Jolo jungle earlier this month, 18 months after he was abducted by the Islamist militants.

US Special Forces have been rotating through Jolo and other parts of the southern Philippines for more than a decade to train local troops battling the group, which is on Washington’s list of “foreign terrorist organizations.”

Thirteen years ago, the Abu Sayyaf managed to pull off a major kidnapping activity when it raided the Sipadan Resort, also in Malaysia.

Abu Sayyaf gunmen are believed to still hold a number of foreign as well as Filipino hostages in Jolo, including two European birdwatchers and a Japanese treasure hunter, according to Philippine officials. With reports from AFP, AP, and Julie Alipala and Allan Nawal, Inquirer Mindanao