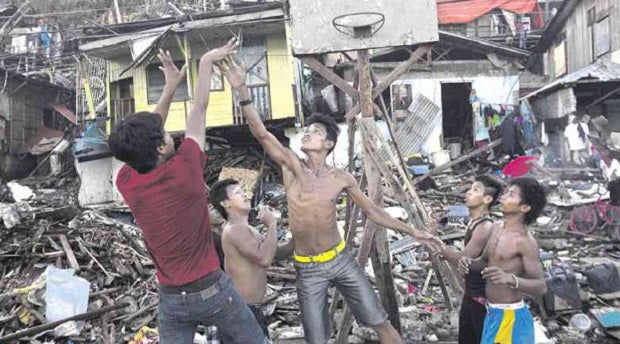 PACIFIC RIM AMONG RUINS Survivors of Supertyphoon “Yolanda” play basketball in a destroyed neighborhood in Tacloban City. Finding the hoop in the ruins, they propped up the backboard with broken wood beams and rusty nails scavenged from vast mounds of storm-blasted homes. AP FILE PHOTO

When James Walton, a sailor of 16 years, first landed in a village on Panay Island last month, smiles on people’s faces were the least he expected to see.

But what the British Navy man experienced amid the staggering devastation wrought by Supertyphoon “Yolanda” in remote Eastern Visayas villages was one he would not soon forget.

“Just the sheer strength of the communities on these small tiny islands that have withstood a wave that was 4 to 5 meters high, have lost everything and still wake up in the morning, smiling and getting on with their lives—that sheer strength of community I’ve never seen anywhere else, ever,” Walton said.

It was the same welcoming spirit and face of determination that made a mark on Capt. Mike Utley, commanding officer of the United Kingdom’s HMS Illustrious, which was dispatched on a disaster relief mission here last month.

“I went ashore every single day, to the places that we were operating in, and everywhere I went, everyone smiles, despite the sometimes horrific destruction,” Utley told reporters invited to board the ship on Wednesday afternoon.

“You know, 90 to 95 percent of their homes were destroyed. They still smile, they still want it to work, they were proud of the lifestyle they had and they wanted to get that back. You know, that’s inspiring for anybody,” the ship captain said.

With the work now shifting to long-term rehabilitation, the Illustrious, a Royal Navy ship that saw action in the Falklands War and was deployed in critical security operations in Iraq and Bosnia, on Saturday left Manila after two weeks of relief and recovery work in up to 30 barangays in the typhoon-ravaged region.

The helicopter carrier, “Lusty” as it is fondly called, was supposed to be already on its way back to its home port in the naval base of Portsmouth in the UK after antipiracy drills off the Somali coast when it was called to take part in Philippine operations. It had arrived on Nov. 25, replacing the destroyer HMS Daring in the relief work here.

The Philippine deployment is one of the last for the 31-year-old ship, among the oldest in the British fleet that is set to be decommissioned by the end of next year.

“HMS Illustrious has done amazing work. She has found those remote island communities that other people have not seen,” said Commodore Clive Walker, commander of the UK Joint Task Force that coordinated British aid operations in Yolanda-hit provinces.

“So I think it is appropriate now to start our disengagement. Our work is done, it is now up to the longer-term agencies, civilian agencies to carry on that good work. But as a nation, our commitment is still toward the Philippines. And I believe this is the start of a very enduring relationship between our two countries,” he told reporters.

Throughout its stay, the 194-meter ship and its 900 personnel composed of soldiers—Marines, army, air force, navy—and humanitarian workers delivered some 400 tons of relief supplies to typhoon-affected villages, distributing them through its seven helicopters.

Capt. James Greswell, a Marine of five years who was part of reconnaissance and aid delivery missions in some of the villages hardest to reach, said relief packages included two weeks worth of a “nutritionally balanced” food supply as well as shelter materials.

He had as much to say about the warmth of typhoon survivors his group met in the devastated islands. The interaction got so close that, after staying for two to three days in a village, the British troops were already considered part of the local communities they had served.

“Especially considering the circumstances, the experience, the trauma that the communities have had, it was overwhelming really how generous and gracious they were in accepting sort of strange people,” Greswell said.

“As I say, these people are extremely resilient and all they need is that help, those tools, the equipment to start putting their life together. We gave them a lot of help with that, but they can help themselves and they want to rebuild their lives, rebuild their villages and get back to normal,” Utley said.

The Illustrious’ contribution is on top of the UK’s total aid to the Philippines for post-Yolanda response, already the largest foreign assistance so far, per estimates of the United Nations Office for the Coordination of Humanitarian Affairs.

He said the UK government will stay true to its vow to continue assisting the Philippines as it treads the long road to rehabilitation. Lewis said the government would meet the international community next week to discuss areas that would need support.

“Our aid response so far has been first response, immediate to the relief of typhoon. What we now need to consider with the international community is our long-term commitment,” said Lewis, adding that the UK will firm up its support after assessing the Philippine government’s report scheduled on Wednesday.

He said the UK will work closely with all actors “to avoid overlap and duplication of effort and resources.”

No food aid for ‘Yolanda’ victims from UK for DSWD