Atyani glad to be back, looks forward to family reunion

MANILA, Philippines – Former Abu Sayyaf captive Baker Atyani looked gaunt, but smiling, in his loose-fitting dark green shirt he wore the first time he set foot in the Philippines in 2012.

After being away with his wife and four sons for 18 months, the Jordanian journalist held by the Al Qaeda-linked group expressed Friday night his anticipation to reunite with his family.

In a media briefing at the Philippine National Police headquarters in Camp Crame, Atyani said while he cannot “express well his feelings and emotions,” he’s “glad and happy” to be back.

“Well the first thing I should talk about is that I’m really glad and I’m happy that I’m back. I’ll be meeting soon my loved ones. My feelings and emotions I can’t really explain them well. I’m sure you understand that,” he told the media. 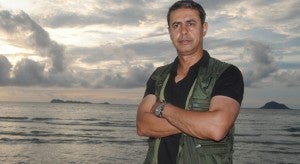 In this photo taken on Monday June 11, 2012 veteran Middle Eastern TV reporter Baker Atyani, poses by the sea wall in Jolo, the capital of the island province of Sulu in Southern Philippines during his taping of his story of the island, a hotbed of Muslim militants about 950 kilometers (590 miles) south of Manila. AP

In his less than a minute speech, Atyani thanked his colleagues in the media, as well as the netizens, who stood behind him during his captivity.

“And I really would like to thank all those who stood for me during this crisis. You, my colleagues in the media, friends, those who were showing their support on the social network and maraming salamat,” he said.

Senior Superintendent Renato Gumban, chief of the PNP Anti-kidnapping Group, confirmed that Atyani escaped from the Abu Sayyaf camp, debunking speculations that he was freed by the Moro rebel group.

“He told us how he escaped, how he crossed a mountain and two more small mountains before reaching the populated area,” Gumban explained.

Last Wednesday, the Jordanian journalist, whose weight drastically went down from 76 kilograms to 60 kg, was found by police authorities “walking on the road” in Patikul, Sulu.

But Gumban emphasized that according to Atyani, he was not abused by his captors.

“He lost 16 kilograms because he only ate rice and fish there,” the PNP official said.

While Atyani is at the PNP-AKG office, he will undergo stress debriefing, which Gumban said would only take 30 minutes up to an hour.

“We will ask him everything. All the information regarding the hostages. After his participation, we will turn him over to their company,” he said.

Atyani, a Jakarta-based reporter with the Pan-Arabic Al-Arabiya News Channel (he is bureau chief for Southeast Asia), was kidnapped with two Filipino crew members while on a coverage in Sulu on June 12 last year.

In February the militants released the two crew members, who said they were separated from the Jordanian on the fifth day of their captivity.

The anti-kidnapping chief said Atyani might return to his country as early as Saturday or Sunday.
Related Stories: