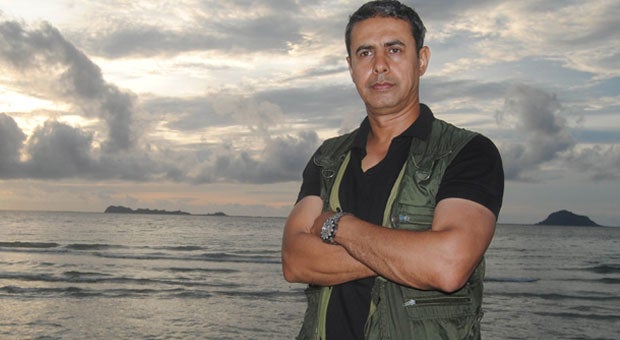 In this photo taken on Monday June 11, 2012 veteran Middle Eastern TV reporter Baker Atyani, poses by the sea wall in Jolo, the capital of the island province of Sulu in Southern Philippines during his taping of his story of the island, a hotbed of Muslim militants about 950 kilometers (590 miles) south of Manila. AP

ZAMBOANGA CITY, Philippines — “Now I see the light of freedom. My freedom is back.”

This is how Jordanian journalist Baker Atyani, bureau chief for Southeast Asia of the Al Arabiya News, described his liberty after 18 months of being in the hands of his Abu Sayyaf abductors in Sulu.

A Philippine Daily Inquirer informant, who was present during Atyani’s debriefing but refused to be identified as he was not authorized to speak on the matter, said the 45-year-old journalist insisted that he was not taken as hostage but as prisoner.

“(I was taken as) prisoner because I didn’t commit anything against them. I came here for work. I was told by armed men that they took me as captive, but I was told it’s all about money,” the informant quoted Atyani as saying.

Atyani claimed he tried to escape several times, before succeeding to do so on Wednesday night (not Wednesday morning as initially reported).

“The first, I was caught because I was not so familiar with the terrain. The second time, the same — I was caught. But the third attempt I tried to hit the water or sea, that was my aim,” Atyani said.

In the morning of December 4, Atyani claimed that he observed his captors were lax in guarding him. “It seemed there’s problem among my captors, security was lax so I took advantage of that.”

At around 4 p.m. Wednesday, Atyani walked away from where he was allowed to roam inside the Abu Sayyaf territory.

“I started running and running, taking short breaks in between for three long hours. I was targeting to reach the water until I was spotted by uniformed personnel,” he said.

Chief Inspector William Conrad Gutierrez, chief of the Patikul police, said they received information about “a foreigner who appeared to be running away from someone” in Barangay Igasan in Patikul.

When checked at around 7 p.m., Gutierrez said, Atyani introduced himself to the police.

“Doon nagsimula syang magsalita ng magsalita (That was when he started to talk) and he can utter some Tausug words,” Gutierrez told the Inquirer by phone.

Atyani and his two Filipino crew, Ramelito Vela and Rolando Letrero, were kidnapped when an unidentified man fetched them from the Sulu State College Hostel in the early morning of June 12, 2012.

“Sobrang payat niya (He’s so thin). He told us that prior to his captivity, he weighed 80 kilograms, now he is around 50 kilos. The kidnappers fed him mistang (porridge),” Gutierrez said.

Atyani also had mosquito bites all over his body, Guiterrez said.

The Inquirer informant said that when Atyani was brought to Integrated Provincial Health Office (Provincial Hospital) in Jolo town, “he started talking and talking and he appeared very happy when he saw local journalists.”

The source said Atyani’s blood pressure “shot up to 160 over 120,” prompting the attending physician to make him rest.

The Inquirer informant, however, said Atyani did not escape, but was released by his captors.

“After validation from a local source regarding the release of Atyani, he disclosed that the victim was guided by an Abu Sayyaf member to a sitio where he was released. Then his unknown negotiator received him and accompanied him to Barangay Taglibi,” the informant said.

He added that Atyani was kidnapped by Abu Sayyaf sub-leader Julasman Sawadjan in Barangay Tanum in Patikul town on June 12, 2012.

As of 2 p.m. Thursday, Atyani was still undergoing debriefing at the provincial hospital. He is scheduled to be flown to Manila either Friday or Saturday, the Inquirer source added.