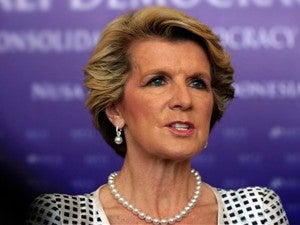 Foreign Minister Julie Bishop “should be asking questions about the Philippines’ paralyzed criminal justice system that fails to prosecute the people responsible for killings and disappearances,” HRW Australian director Elaine Pearson said in a statement Friday.

Bishop will be in the country from December 7 to 8 after visiting China and Indonesia.
Bishop should raise the human rights issues in the Philippines, such as extrajudicial killings and enforced disappearances and torture during her meetings with Foreign Affairs secretary Albert del Rosario and other Cabinet secretaries, Pearson said.

“It would be an affront to the victims for Bishop to stay silent in the face of serious human rights abuses in the Philippines, Indonesia and China,” she said.

Pearson cited the reported 10 journalists killed in 2012 and that 24 media workers have been killed since President Benigno Aquino III was elected into office as among the issues Bishop should raise with the Philippine government.

Aquino’s promised creation of a “superbody” that will investigate and prosecute extrajudicial killings needs to be brought up as well since it has yet to materialize, Pearson said.