Jordanian journalist expected back in Manila–PNP 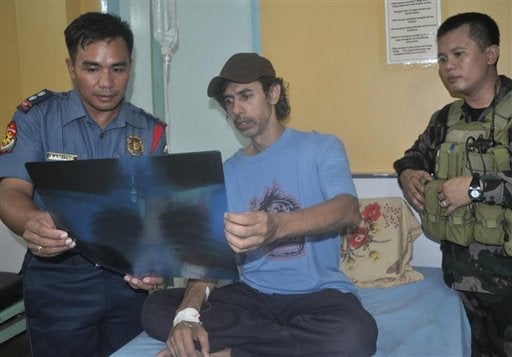 Baker Atyani is expected to be brought to the Philippine National Police Anti-Kidnapping Group office upon his arrival.

PNP spokesperson Reuben Theodore Sindac added that the Jordanian journalist may arrive at the PNP headquarters in Camp Crame in Quezon City between 3 and 4 p.m.
After 18 months in captivity, Atyani escaped from the Abu Sayyaf camp in Patikul, Sulu on Wednesday.

Jordanian journalist may be flown to Manila—PNP spokesman

Read Next
Filipinos played dead to survive Yemen attack
EDITORS' PICK
Cherry Mobile teams up with Cloud Panda PH, launches online store
Leveling up your ‘lutong bahay’ with the kitchen companion you never knew you needed
Trump took shelter in White House bunker as protests raged
WATCH: Edsa traffic blues on GCQ Day 1
Someone from the Philippines can become $356 Million richer this Tuesday
Calida attends House hearing on ABS-CBN franchise
MOST READ
‘If I had not been SolGen, I will make you eat your words,’ Calida tells Coco Martin
5 car dealership outlets shutting down
Calida says he is not ‘at loggerheads’ with Congress on ABS-CBN issue
WATCH: Edsa traffic blues on GCQ Day 1
Don't miss out on the latest news and information.