Mom puts up bounty for missing daughter in Tacloban 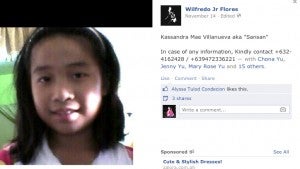 Photo of missing 9-year-old Kassandra Mae Villanueva posted on her mother’s Facebook account on November 14. Her mother, Jella Yu, is putting up a P20,000 bounty for Kassandra, who went missing after Supertyphoon Yolanda struck their house in Tacloban City last November 8.

MANILA, Philippines— “I know how to make bubble. I can swim a little.”

This was nine-year-old Kassandra Mae Yu-Villanueva’s last message to her mother on Facebook a day before she disappeared when Supertyphoon “Yolanda” (Haiyan) struck Leyte on November 8.

Still missing almost a month after, her mother Jella Yu has now come to terms that Kassandra might have already joined her younger sister, Shamel Anne, who perished from the typhoon.

All Jella wants now is to find Kassandra’s body.

The 34-year-old mother, who is working in Abu Dhabi, is putting up a P20,000 bounty for those who can find her eldest daughter.

From Abu Dhabi, Jella travelled 24 hours to Manila and then to Cebu before she could finally reach Tacloban City, one of the areas severely hit by the typhoon, to personally look for her two daughters, whom she left under the care of her elder sister, Jenny, and their 67-year-old mother Salome.

Jella said her mother and other relatives also perished from the typhoon.

From Cebu, she had to travel by sea to get to Ormoc where she took a bus to get to Tacloban City.

“I bought some grocery for my family and kids in Cebu. I was thinking that my daughters are already running out of food. It’s a good thing there was a bus when we arrived in Ormoc,” she said.

But Jella said getting a ride to Tacloban was difficult because the drivers were afraid to travel to the city, saying the people there would stop them on the road or snatch their food.

It was only around 4:30 a.m. of November 11 when Jella and other passengers finally convinced a driver to bring them to the city.

“But we were terribly nervous. All the food that we bought were placed in separate bags as a precaution in case we would be flagged down. I put my passport inside my jacket while may money and cards were hidden inside my shoes,” she recalled.

When they finally arrived in Tacloban, Jella said her brother was surprised to see her.

“When I approached him, I immediately asked about my daughters. He said we will just talk about it at home. I told him no. Are they alive or dead? Then my brother started to cry,” she said.

“I asked he, ‘Who is alive and who is dead?’ He said, two of them. I felt like the whole world crumbled beneath me.”

Unlike Kassandra, Shamel’s body was immediately found after the typhoon.

She returned to Abu Dhabi last November 19, unsure whether she still wants to return to the Philippines.

“I have no mother, father and children. My siblings have their own families. I feel that I’ am alone. I take a vacation every year but I have no reason anymore to go back home. I don’t have a house anyway, it was washed out also,” she said in their Waray dialect.

Jella took to Facebook last December 3 to express the pain of losing her family, specially her daughters.

“Thank you Lord, You lent them to us even for a short period of time. They brought happiness to the family,” she said.

Jella said she would miss her daughters specially their Friday chat on Skype where she would watch them do a fashion show for her.

“What I will miss from Shamel is her being a sweet kid. She’s not shy. When you tell her to dance or sing, she would do that. She’s not shy,” she said of her youngest daughter.

“Shamel is the favorite niece of my family. She’s good in English and she’s a good daughter. She’s the most active among her nieces. She brings joy to our family,” she said.

“San-San (Kassandra’s nickname) is a sweet kid, I will miss her. She acts like a grown-up kid. She acts like a big sister to her cousins whenever they are fighting,” Jella said of her first daughter.

She might have been away from her daughters when she decided to work abroad in 2009 but Jella said she does not regret as she was able to give them everything they wanted.

“I sacrificed myself for them, for their good future,” she added.