Jordanian journalist may be flown to Manila—PNP spokesman 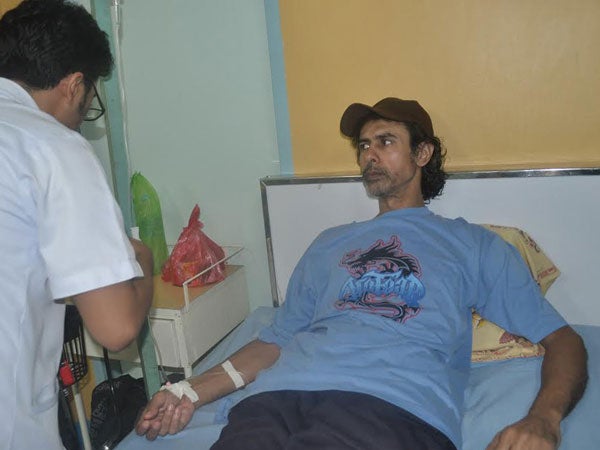 Veteran Middle Eastern TV reporter Baker Atyani, undergoes medical checkup following his release from one-and-a-half years of captivity in Jolo, the capital of the island province of Sulu in Southern Philippines late Wednesday Dec.4, 2013. Baker Atyani, a Jordanian national who met and interviewed Osama Bin Laden and his aides in Afghanistan months before the Sept.11, 2001 attacks and now Al-Arabiya’s TV Bureau Chief for Southeast Asia based in Jakarta, was doing a story of the island, a hotbed of Muslim militants about 950 kilometers (590 miles) south of Manila, when kidnapped June 12, 2012, with his two Filipino crew on a restive Jolo island where militants are active, officials said. AP/NICKEE BUTLANGAN

MANILA, Philippines – If his physical condition permits, freed Jordanian journalist Baker Atyani may be brought to Manila, a spokesman for the Philippine National Police said Thursday .

Senior Superintendent Wilben Mayor of the PNP Anti-Kidnapping Group is set to transport Atyani from Sulu to Manila where proceedings on his case will be held.

After 18 months in captivity, the foreign journalist was released by his Abu Sayyaf abductors in the village of Igasan in Patikul town before 9 a.m. early Wednesday.

“Considering that it is a kidnapping incident, the case is under PNP-AKG. Its director Senior Superintendent Renato Gumban said they are planning to fetch him from Sulu to Manila,” Mayor said.

Mayor said after he was recovered by the authorities, Atyani, who noticeably lost weight, was immediately brought to Sulu Integrated Provincial Health Office for medical treatment.

Suffering from high blood pressure, the PNP spokesperson said Atyani had no other health concerns.

“But we have to consult the doctors and medical personnel there first if he is fit for travel,” he added.

Atyani, a Jakarta-based reporter with the Pan-Arabic Al-Arabiya News Channel (he is bureau chief for Southeast Asia), was kidnapped with two Filipino crew members while on a coverage in Sulu on June 12, 2012. In February the militants released the two crew members, who said they were separated from the Jordanian on the fifth day of their captivity.

Mayor said they would personally ask Atyani’s consent before undergoing a debriefing so he could give important details regarding his abduction.

Asked when Atyani would return to his country, Mayor told INQUIRER.net that there was no date yet.

“But according to Gumban, the authorities have informed the consul of Jordan of his release,” he said.

He also reiterated that journalists covering Sulu must avoid critical areas in Mindanao.

“Before going there, they should seek security first from the authorities,” he said.

Read Next
Atyani says he escaped due to lax security at Abu Sayyaf camp
EDITORS' PICK
Leveling up your ‘lutong bahay’ with the kitchen companion you never knew you needed
Cherry Mobile teams up with Cloud Panda PH, launches online store
Crisis seen in absence of jeepneys in Metro Manila
Gov’t urged to shift public transport system to service contracting
MMDA: Commuters to blame for chaos
WATCH: Mga eskwelahan na ginawang quarantine facility, binigyan ng dalawang linggo para linisin
MOST READ
MMDA to sue, slap P1,000 fine on bike group
MMDA: Commuters to blame for chaos
‘I am a natural-born Filipino’ — Gabby Lopez
Calida ‘just the lawyer, not the client’ and must ‘never lose his cool’ – Macalintal
Don't miss out on the latest news and information.