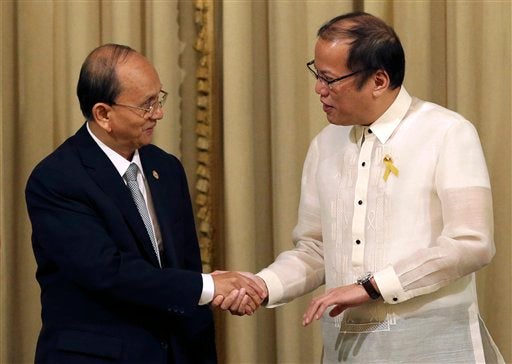 MANILA, Philippines  — Myanmar’s president called Thursday for more investment and development assistance from the Philippines, saying his country needs help to catch up with the rest of Southeast Asia after emerging from nearly two decades of economic sanctions.

President Thein Sein’s visit represents a milestone in relations with the Philippines, one of the harshest critics of Myanmar’s former ruling junta. Thein Sein’s elected government took office in 2011, ending a half-century of military rule.

Thein Sein met Thursday with Philippine President Benigno Aquino III, who said he was confident Southeast Asian nations would achieve economic integration by 2015. The regional bloc, ASEAN, will be under Myanmar’s stewardship next year.

The two presidents witnessed the signing of six agreements in areas including no-visa visits to Myanmar for Filipinos and cooperation in several sectors.