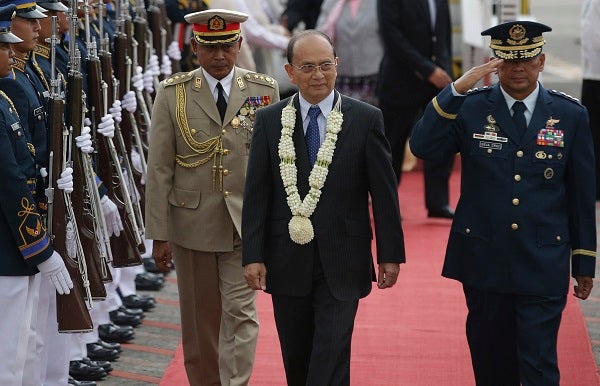 MANILA, Philippines—President of Burma (Myanmar) Thein Sein arrived in Manila on Wednesday for a three-day state visit, during which he will sign agreements with the Philippine government, including one that would provide visa exemptions to ordinary Filipino passport holders.

At present, Burma requires a visa for Filipinos while its nationals are among those from 151 countries allowed to enter the Philippines without a visa, based on the list in the Bureau of Immigration website.

Sein, 68, was elected Burma’s chief executive by the parliament in 2011. He is the first civilian president since 1962. A former member of Burma’s military junta, he served as prime minister from 2007 to 2011.

Visiting Manila for the first time upon the invitation of President Aquino, Sein will also sign agreements on food security and agriculture, renewable energy, and trade and investment cooperation.

There will also be a separate agreement on “information cooperation in the fields of news exchange, radio and television broadcasting, film industries, public relations, and printing and publishing,” Communications Secretary Herminio Coloma said in a press briefing.

After the signing of agreements at Malacañang at 11:15 a.m. Thursday, the Deparment of Social Welfare and Development and its Burmese counterpart will “exchange notes” on the turnover of donations for victims of Supertyphoon “Yolanda.”

The Palace on Tuesday noted that Burma had donated $100,000 on top of seven tons of relief for typhoon victims.

Sein will kick off his state visit with a wreath-laying ceremony at the Rizal monument in Manila at 9:35 a.m. Thursday, then proceed to Malacañang for a welcome ceremony and an “expanded bilateral meeting” an hour later.

Sein and Aquino will tackle “issues of mutual concern, particularly in the areas of trade and investment, agriculture, energy, cultural exchanges and information, among others,” Malacañang said.

Also in the menu would be “regional issues, including Burma’s historic chairmanship of the Association of Southeast Asian Nations (Asean) in 2014.”

Sein and Aquino will issue press statements shortly before the state luncheon at the President’s Hall.

Sein is set to visit the International Rice Research Institute in Los Baños, Laguna province, later in the afternoon, before meeting with Burma’s ambassador to the Philippines in Makati City.

The following day, Sein will fly to Cebu province for an aerial inspection of Bantayan Island. He is set to return to Burma from the Mactan International Airport at 1 p.m.—With a report from Jerome Aning