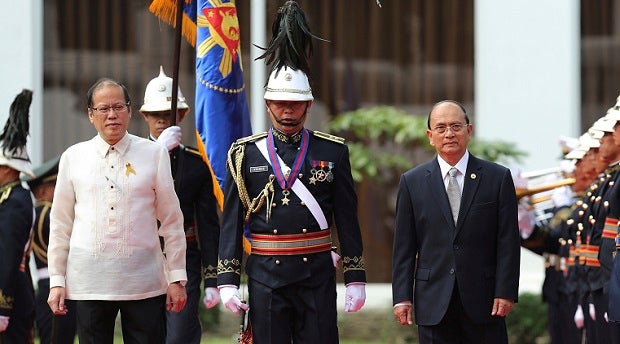 Philippine President Benigno Aquino III, left, walks with Myanmar’s President Thein Sein, right, as they inspect a guard of honor upon arrival at the Malacanang Presidential Palace in Manila, Philippines on Thursday Dec. 5, 2013. Thein Sein brought additional typhoon aid with him during his visit to the Philippines, where he is also expected to seek support for his country’s hosting of an Asian summit next year. AP/Aaron Favila

Thein Sein arrived at Manila’s presidential palace where he was accorded a red carpet welcome for his first visit to the Philippines.

Aquino said the Philippines, which also made a transition from authoritarian rule to democracy in the 1980s, would be helping Myanmar in opening up its society.

Formerly one of the most vocal critics within Asean of Yangon’s ruling junta, Aquino praised recent “historic developments” in Myanmar which include the holding of elections, release of political prisoners, dialogue with the opposition and opening up to foreign investment.

“These herald a new chapter in Myanmar’s history. The Philippines supports these initiatives and offered assistance through capacity building, through technical cooperation,” said Aquino after a meeting with Thein Sein.

The Philippines has offered to help Myanmar establish its human rights commission and training in areas like agriculture, entrepreneurship, fisheries, eco-tourism and “gender issues,” Aquino said.

The two presidents also discussed peace efforts with rebel groups in their respective countries, Aquino said, adding that the Philippines would be appointing a resident defense attaché to further cooperation.

The leaders also oversaw the signing of several agreements including one that will allow Filipinos to enter Myanmar without a visa and another that will expand cooperation in renewable energy.

Thein Sein, who will be bringing doctors and relief goods to typhoon-hit areas during his visit, said the damage suffered by Myanmar during the 2008 cyclone, made the country more aware of the suffering of the victims of such disasters.

The Myanmar leader, who is on a three-day state visit, said he asked Aquino to help his country in areas like “health, education, economy and human resource development,” because it was lagging behind in these areas due to years of economic sanctions.

He also said “there have never been any issues between Myanmar and the Philippines,” despite Aquino’s previous criticism of the junta.

Thein Sein arrived in Manila on Wednesday and will return home on Friday after visiting the typhoon-stricken areas.

Myanmar and the Philippines are both members of Asean, the Association of Southeast Asian Nations.

Myanmar has undergone a series of reforms in recent years, including the release of opposition leader Aung San Suu Kyi from years of house arrest and her election to parliament in by-elections held last year.

But the military and its political allies remain in control of parliament while religious violence and the continued arrests of activists have tempered optimism about the political reforms.