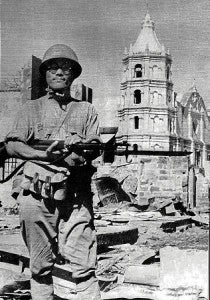 TACLOBAN CITY, Philippines—More than 1,000 Japanese troops were offered a warm welcome here on Friday as they prepared to launch relief operations across typhoon-devastated islands that Japan brutally occupied seven decades ago.

The troops were aboard three vessels that arrived at the port of Cebu, an official at the Japanese Embassy said, in what is the biggest overseas deployment of Japan’s military since its defeat in World War II.

The troops will join a huge international relief effort to help survivors of Supertyphoon “Yolanda” (international name: “Haiyan”), which flattened dozens of towns through central Philippines on Nov. 8, leaving at least 5,500 dead or missing.

“We have already delivered small amounts of aid but the main effort will begin after a meeting with Philippine forces today,” said Takashi Inoue, deputy director of public affairs at the Japanese Embassy in Manila.

Japan’s contribution to the humanitarian effort comes as a newly confident Tokyo looks to make its mark again on the world order, after decades in which the idea of its troops on foreign soil was complete anathema.

In many parts of Asia, memories linger of the brutality of invading Japanese soldiers who went on an expansionist romp through the region in the name of its emperor.

In a twist of historic irony, the Japanese troops are returning to areas of the Philippines that saw Japan lose one of history’s biggest naval battles to the US-led Allies.

Eulalia Macaya, 74, who survived World War II and the typhoon, said she remembered being terrified by Japanese troops as a little girl.

“We were hiding in holes dug under the floor of our homes,” she recalled. “The Japanese soldiers were patroling but we couldn’t see much of them. We could only see their boots. We were so afraid.”

But Macaya, who was waiting for treatment at a temporary field clinic set up by the Japanese government in this typhoon-ruined capital, said she was very pleased the former occupier was back.

“I don’t hold any grudges anymore. There’s no more bad blood between us,” she said.

Tente Quintero, 72, a former vice mayor of Tacloban, said that at a time of dispute with an increasingly emboldened China over the ownership of West Philippine Sea (South China Sea) islands, Filipinos now saw the Japanese as friends and allies.

He declared himself “happy” there were Japanese boots back on Philippines soil.

“There’s nothing like two allies living in harmony with each other,” he said.

Beatrice Bisquera, 91, said the devastation and hardships Yolanda had brought were worse than anything Filipinos suffered under Japanese military rule.

“During the Japanese occupation we just hid in the mountains. Now, there’s nowhere to hide,” she said.

Lt. Jim Alagao, spokesperson of the Armed Forces of the Philippines, said the country was thankful for Japan’s typhoon support, and that World War II was no longer a concern for his generation.

“World War II was so long ago. If we still harbor bad feelings against the Japanese, it is a question for our grandfathers to answer,” he said.

“We are very grateful for all the help that other nations can give.”

For some Japanese relief workers already on the ground in Leyte province, their country’s participation in the international relief effort alongside the United States is an indication of Japan’s very different relationship now with the outside world.

“We cannot forget the past, but we must learn from history so that we will not do the same thing again.”