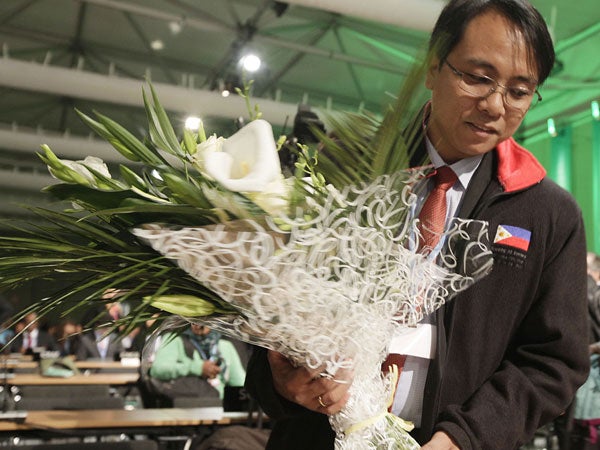 Naderev Saño holds flowers presented by other nations and organizations as a sympathy symbol for the Philippine people hit by supertyphoon “Yolanda” during the opening of the United Nations Climate Change Conference in Warsaw, Poland, on Nov. 11, 2013. Sano was given a standing ovation after he announced he would fast for the duration of the conference until it comes up with “meaningful outcome.” But his boss reprimanded him for crying in public and staging a hunger strike. AP

MANILA, Philippines—While the rest of the world was rooting for Philippine Climate Change Commissioner Naderev “Yeb” Saño when he made a tearful plea at the United Nations conference to stave off global warming, his boss was reprimanding him for crying in public and staging a hunger strike in the Warsaw forum, saying that such actions “had (their) proper place.”

A day after Saño gave an emotional speech to kick off the two-week negotiations between developed and developing countries for a tougher stance against the rise of “greenhouse gases” in the earth’s atmosphere, Climate Change Commission chair and secretary Lucille Sering fired off a strongly worded e-mail indicating her disapproval of Saño’s actions.

In her Nov. 13 e-mail obtained by the Inquirer, Sering told Saño: “I hope you know what you are doing. I am, however, disappointed that you did not heed my request (for you) not to cry. I made this request a day before the opening. I believe you said yes. Kung hindi mo pala kayang ’di umiyak, sana hindi ka na nagsalita (If you couldn’t stop yourself from crying, you should not have spoken).”

In his Nov. 11 speech, Saño blamed global warming for the “staggering” devastation caused by Supertyphoon “Yolanda” in the Philippines.

“What my country is going through as a result of this extreme climate event is madness, the climate crisis is madness. We can stop this madness right here in Warsaw,” Saño had said, choking back tears as he recounted how he had just gotten word that his family in Tacloban City was safe after the storm.

His tears moved some delegates to stand up and applaud. They also set the mood for the start of negotiations for a new treaty that would work out a mechanism to raise a $100-billion loss-and-damage fund to compensate countries like the Philippines that usually bear the brunt of extreme weather conditions.

In her e-mail, Sering said that President Aquino, in a meeting with the National Disaster Risk Reduction and Management Council, “specifically gave instructions that anyone facing the media must show a picture of strength to calm fears.”

Saño’s boss also censured him for his decision to “voluntarily refrain from eating food during this (conference) until a meaningful outcome is in sight.”

“I don’t mean to be insensitive but declarations like that (have their) proper place. We do not blackmail people to give in to our demands (especially) when you are negotiating,” Sering said, adding that she understood Saño’s pain, having experienced Typhoon “Nitang” in 1984 and having grown up in Surigao City where storms are a way of life.

“Please do not use the UNFCCC (UN Framework Convention on Climate Change) as your personal platform. May ibang lugar para d’yan (There’s a proper place for that),” Sering said.

“I am not sure this is wise,” she added. “As you go down the stretch of the negos, you need all the strength to get by. Hence, I would like to prevail on you to reconsider, otherwise I’ll have to make arrangements for you to go home.”

In a text message to the Inquirer, the chair of the Philippine Climate Change Commission said that while she disagreed with Saño’s hunger strike, she approved of its message. “He did not inform anyone of his intention to go on hunger strike,” Sering said.

She added that she had asked the commission’s staff with Saño to check on him to ensure that he remained healthy during the duration of the negotiations expected to end this week.

She also gave a gag order to the Philippine delegation. “We can pass it to the Presidential Communications Group and let them handle it from here,” Sering said, adding that anyone itching to talk (kating-kati magsalita) can just eat off this urge (ikain n’yo na lang ’yan).

Despite her salty words, Sering signed her letter “With love.”

The Philippine negotiating team said they were just as surprised by Saño’s moves, but that they respected and supported him as the country’s lead negotiator.