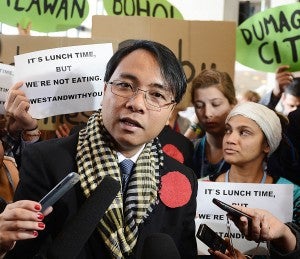 Naderev Sano, center, of the Philippines’ delegation talks to the press during the United Nations Climate Change Conference COP 19 in Warsaw, Poland, Tuesday, Nov.12 2013. In a mass show of support in the wake of Supertyphoon “Yolanda” (Haiyan), members of civil society at the UN climate talks will begin a voluntary fast in solidarity with Filipino negotiator Sano, who announced that he would be fasting until “a meaningful outcome is in sight.” AP PHOTO

WARSAW, Poland—The devastation caused by Supertyphoon “Yolanda” cast a gloom over UN climate talks on Monday as the envoy from the Philippines broke down in tears and announced he would fast until a “meaningful outcome is in sight.”

Naderev “Yeb” Sano’s emotional appeal was met with a standing ovation at the start of two-week talks in Warsaw where more than 190 countries will try to lay the groundwork for a new pact to fight global warming.

“We can fix this. We can stop this madness. Right now, right here,” Sano said.

Choking on his words, he said he was waiting in agony for news from relatives caught in the massive storm’s path, though he was relieved to hear his brother had survived.

“In the last two days he has been gathering bodies of the dead with his own two hands,” said the Philippine climate change commissioner.

“In solidarity with my countrymen who are struggling to find food back home … I will now commence a voluntary fasting for the climate,” he added. “This means I will voluntarily refrain from eating food during this (conference) until a meaningful outcome is in sight.”

UN climate chief Christiana Figueres also made reference to the “devastating impact” of the supertyphoon internationally designated as “Haiyan” in her opening speech, and urged delegates to “go that extra mile” in their negotiations.

Nevertheless, extreme weather such as hurricanes often prompt calls for urgency at the UN talks.

Last year, the assault of Hurricane “Sandy” on the US East Coast and the impact on the Philippines of Typhoon “Pablo” (international name: “Bopha”) last year were mentioned as examples of disasters the world could see more of unless it reins in the greenhouse gas emissions that scientists say are warming the planet.

On the sidelines of the conference, climate activists called on developed countries to step up their emissions cuts and their pledges of financing to help poor countries adapt to rising seas and other impacts of climate change.

Tense discussions also are expected on a proposed “loss and damage” mechanism that would allow vulnerable countries to get compensation for climate impacts that it’s already too late to adapt to.

Asked whether the United States had any plans to increase its emissions target in the international talks, US negotiator Trigg Talley said the “focus for us now” was to meet the existing target, of cutting emissions by 17 percent between 2005 and 2020.

“I think that we are on the right track to achieve it,” he said, noting US President Barack Obama’s plans to cut emissions from power plants, boost renewable energy and other measures.

Though no major decisions are expected at the conference in Warsaw’s National Stadium, the level of progress could be an indicator of the world’s chances of reaching a deal in 2015. That’s the new watershed year in the UN-led process after a 2009 summit in Copenhagen ended in discord.

In Manila, Science Secretary Mario Montejo said Yolanda had spurred his department’s work on flood hazard maps that would simulate the impact of storm surges.

These “inundation surge maps” for storm surge-vulnerable coastal areas along with the flood hazard maps for flashflood-prone areas should be ready before the start of the typhoon season in June next year, Montejo said.

“It’s very difficult, very challenging to be able to foresee such catastrophe and its impact on the people. But we can’t afford to give up,” Montejo said in an interview on Tuesday.

He said just recently storms showed the importance of having accurate flood maps to save residents in low-lying areas from destructive flooding, Yolanda showed how deadly storm surges can be.

The weather bureau had warned against the storm surge as Yolanda approached.

“We’re able to anticipate the storm surge and that they would be as high as four meters. We gave the warning so the President came out on TV. But we have to help each other so that the information will be understood,” Montejo said.

“We need next inundation surge maps similar to the flood hazard maps,” he added.

He was referring to the flood maps produced by the Department of Science and Technology’s Project Noah (Nationwide Operational Assessment of Hazards) composed of scientists from the University of the Philippines to upgrade the Philippine Atmospheric, Geophysical and Astronomical Services Administration’s early warning systems.

Local chief executives of 84 of the most flashflood-prone cities and municipalities will get the first batch of the cutting-edge three-dimensional flood hazard maps produced by the country’s own geodetic engineers.

The Disaster Risk and Exposure Assessment for Mitigation, the biggest component of Project Noah, has completed 3D flood hazard maps for 11 cities and 73 municipalities located in 17 of the 18 critical river systems in the country.—With reports from AP, Tarra Quismundo, Dona Z. Pazzibugan and Jeannette I. Andrade