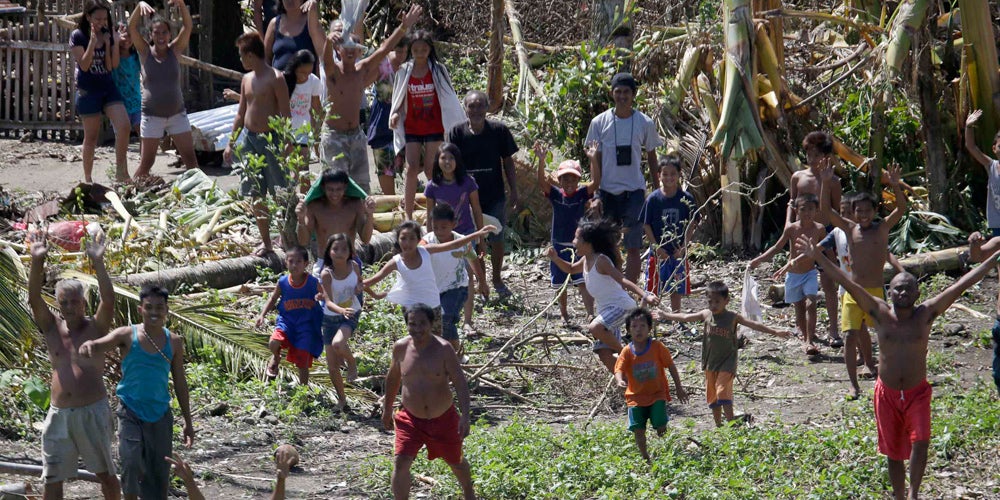 Villagers, isolated by super typhoon Haiyan a week ago, scramble for relief goods being dropped by Philippine Air Force at La Paz, Leyte province in central Philippines, Friday Nov. 15, 2013. Survivors of Typhoon Haiyan, one of the most powerful typhoons ever recorded, have only now begun to receive some aid, a week after their homes and lives were torn apart. AP

Despite the strained relations between Hong Kong and the Philippines, the Hong Kong public has donated HK$5.9 million (P33 million) for the victims of Supertyphoon “Yolanda.”

The Hong Kong Red Cross (HKRC) said it had launched an emergency appeal to Hong Kong residents on Tuesday for the victims of the typhoon that ravaged central Philippines.

“Up to 4:30 p.m. (Thursday), HKRC has received over HK$5.9 million from the Hong Kong public. We thank the public for their generous donations,” the HKRC said in a statement.

It added that the figure included a US$500,000 donation from the Hong Kong and Shanghai Bank (HSBC) to support “the Philippine Red Cross in providing emergency relief, rehabilitation and recovery assistance to the victims.”

The HKRC said it initially allocated HK$500,000 for emergency relief in the Philippines.

“HKRC will also stage street fundraising activities in various spots across the territory this Sunday,” the agency said.

“Many enthusiastic volunteers, members and staff members have enrolled for the activities in the hope of raising more public concern and donations for the relief operation,” it added.

The donations come even after diplomatic relations between Hong Kong and Manila deteriorated due to President Aquino’s refusal to apologize for the 2010 hostage tragedy that left eight Hong Kong people dead.

Hong Kong Chief Executive Leung Chunying on Nov. 5 said the former Crown colony would impose sanctions on the Philippines if no substantial progress was made in a month’s time in the negotiations to compensate the victims. At the height of international humanitarian efforts in the Visayas, the Hong Kong leader said the deadline will not be extended.

Nevertheless, Filipino community leaders in Hong Kong said many locals want to help victims of supertyphoon Yolanda despite the fallout from the hostage crisis.

“We’ve received a lot of phone calls from (Hong Kong) NGOs and the academe and they’re willing to help,” said Eman Villanueva, spokesperson for the Operation Migrante Sagip Kababayan, a relief effort here in Hong Kong to help the typhoon victims.

“The students of the Chinese International School dressed up in red, white and blue…the colors of the Philippines…(on Nov. 13),” said marketing executive Catherine Feliciano-Chon. The students also donated $20 each to the Philippine Red Cross,” she added.

The HKRC has also set up a Tracing and Psychological Support Service for Filipinos in Hong Kong who have lost contact with their relatives back in the Philippines due to the typhoon.

“HKRC’s Emergency Tracing Service has received 96 enquiries, with 23 cases still in process for seeking 68 missing family members in the Philippines due to this disaster,” the HKRC said.

On the other hand, its Psychological Support Hotline Service, manned by trained psychological support service volunteers and professional clinical psychologists, has handled 34 cases.

“Most of the domestic helpers were worried about the safety of their family members, and we offered them immediate emotional support,” the HKRC said.

However, there are still locals who are angry about the 2010 hostage crisis and who made “abusive and derogatory” remarks online about Filipinos in relation to supertyphoon Yolanda. On Wednesday, Hong Kong’s Equal Opportunities Commission (EOC) reminded all that inciting hatred toward another person or members of a class of persons on the ground of their race was not just inappropriate but also illegal.