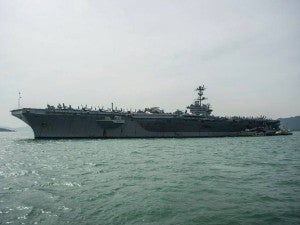 It “will go to a position just off the eastern coast of Samar island in order to begin to assess the damage and provide logistical and emergency support to include medical and water supplies,” the carrier’s commander, Rear Adm. Mark Montgomery, said.

The giant aircraft carrier, carrying 5,000 sailors who were diverted from shore leave in Hong Kong, has the ability to desalinate large volumes of water.

“The friendship between our two countries runs deep, and when our friends are in trouble, America helps,” US President Barack Obama said in a statement.

One US official said relief workers were now better able to distribute aid out of Tacloban airport, and that the opening of a land route had given a significant boost by connecting to a seaport.

The initial effort was “a lot like trying to squeeze an orange through a straw,” the official told reporters on a conference call. “We are now getting more straws, if you will, and bigger straws.”

An army of local and foreign volunteers has stepped up the rescue and relief efforts in areas flattened by Supertyphoon “Yolanda” amid the government’s admission that it failed to promptly use its resources to feed famished families in eastern Visayas.

A 12-truck convoy of the Philippine Red Cross (PRC) arrived in Tacloban City, capital of the devastated Leyte, Thursday afternoon, as government and international aid workers rushed to bring relief goods to Tacloban and surrounding towns.

The day also saw the arrival of two planes from Germany and Spain carrying relief stocks for the people of Eastern Visayas.

The PRC convoy, which left Manila early Sunday morning but had been stranded in the port of Matnog town, Sorsogon province, arrived six days after Yolanda flattened Central Visayas.

It was PRC chair Richard Gordon who broke the good news at a briefing with reporters here following his meeting with water utilities’ officials.

The meeting was called to address the shortage of potable water in Samar and Leyte.

“The convoy has arrived just now,” a beaming Gordon exclaimed, who flew in from Manila to personally oversee the pace of relief work of PRC in Cebu province, Leyte and Samar.

The convoy was a product of combined efforts of Philippine, German and Spanish Red Cross societies that pulled their resources together to speed up the delivery of aid to those who need it most.

Another multiple-vehicle convoy carrying 25,000 food “parcels” and ready-to-eat meals is on the way,  Gordon said.

Noting the arrival of the two planes containing resources for relief efforts, he said the Red Cross had laid the “first step” to recovery.

“It’s important that we act fast—that’s the way to do it,” he said.

“We decided to go the long route” because Tacloban airport had been inaccessible in the aftermath of Yolanda, said Gordon, by way of explaining the tortuous route taken by the 12-truck convoy since Sunday to reach Tacloban.

He said the convoy was also barred from leaving Matnog port because of security concerns.

Once it reached the other side—Allen town, Northern Samar—the convoy had to stop by nighttime because of security concerns and endure the agony of passing through the infamous “abortion highway” in one of the most impoverished and rebel-infested provinces in the country.

The German government, through its Federal Foreign Office, is funding the German Red Cross which, in turn, is supporting PRC in terms of “financial assistance and technical capacity,” said Emilio Teijeira, the head of German Red Cross’ country office in the Philippines.

Teijeira said in an interview that Germany had also sent a

25-member rescue team with equipment for cutting fallen trees and clearing the roads of debris. The team was set to arrive yesterday on a Philippine Navy ship.

It would also set up a self-sustaining field hospital and a large base camp made of collapsible materials “for supporting operations in most-affected areas,” he said.

The Spanish Agency of Cooperation and Development, through its Red Cross which has a presence in the country over the past 15 years, has provided 6,000 jerrycans, 3,000 mosquito nets, 11,000 pieces of tarpaulin, two communications kits (satellites phones and radio sets) and seven water-treatment plants.

The planeload of relief was worth P58 million, said Angel Vicario, an “emergency delegate” for the Spanish Red Cross.

A team of Spanish experts had flown in from Manila to Tacloban to ensure that the treated water would be safe for drinking, he said

“We’ll start distributing, hopefully, by today,” said Vicario. He was joining seven of his fellow Spanish aid workers in conducting a post-disaster assessment in Tacloban.

Gordon has borrowed roll-on, roll-off cargo ships that will bring relief starting Saturday to different ports in Eastern Visayas as part of efforts to get food and water to as many victims as possible.

From the ship, relief stocks will be loaded onto trucks for distribution. The ship will also ferry families to Cebu from typhoon-ravaged Tacloban, Ormoc and other coastal towns.

But Gordon has other plans in mind. Through the help of Cebu Mayor Michael Rama, the Red Cross is setting up a “tent city” in Cebu for the temporary relocation of families.

He also plans to pay typhoon survivors a minimum of P250 per day to bury their dead and clean up their communities under the “food for work” scheme to be employed by the Red Cross in the coming days.

From Filipinos living abroad to total strangers in the United Kingdom and Israel, thousands of relief items have been packed, shipped and are now waiting to be distributed to devastated areas not just in Tacloban and the Leyte-Samar provinces but also on Panay Island.

Singapore has extended a total of S$200,000 in assistance to typhoon victims, the Singaporean Embassy said.

A shipment of 6,000 shelters, 2,400 tarpaulins, water and kits were flown in from the United Kingdom to Cebu for typhoon victims.

In Iloilo City, thousands of volunteers helped pack food items that were sent by Filipinos all over the world to the victims in the provinces of Iloilo, Capiz and Aklan.

Over the last few days, UK and Israel humanitarian aid has landed in Cebu. The total UK aid now stands at £15 million while the Israeli delegation donated $4 million.

The first UK shipment on a chartered Boeing 777 arrived at Mactan International Airport early this week carrying 8,836 shelter kits from the UK government facilities in Dubai. The shelter kits consist of plastic sheets, rope and rope tensioners, and each one will keep a family of five sheltered from the elements.

The second UK cargo shipment that arrived on Wednesday consisted of 6,000 shelter kits and 2,400 tarpaulins.

The shelter kits will be delivered to the victims by World Vision, a nongovernment organization (NGO) partner of the UK government, UK Ambassador to the Philippines Asif Ahmad said here.

The first two of the several UK-funded shipments also carried food, water, medicines and other supplies to be delivered by their NGO partners over the coming days and weeks.

Ahmad said the United Kingdom’s NGO partners would be staying in the Philippines for six to 12 months to help devastated areas recover.

An Israeli humanitarian team also arrived in Cebu on Thursday to provide medical care for disaster survivors. It is equipped with tons of humanitarian and medical supplies from Israel.

A $4-million medical facility will be constructed for a children’s department, an obstetrics department, ambulatory care department and a general ward, operated by Israeli doctors, nurses and health workers.

In Iloilo City, thousands of Ilonggos and other residents of Western Visayas have volunteered to help in packing relief assistance.

From Canada to the United States and Europe, natives of Western Visayas are campaigning for clothes and money.

On Thursday 4,000 students of Iloilo National High School (INHS) joined a “typhoon holiday” and saved their allowance for the day to buy rice and other food to be sent to student victims in island-barangays (villages) of northern Iloilo.

Their contribution will also be used to help repair school buildings in the island-barangays that were destroyed or severely damage by the typhoon, said Norby Siason, INHS principal.

At the Iloilo provincial capitol and the regional office of the Department of Social Welfare and Development (DSWD), hundreds of students and other volunteers have been pouring in since Saturday.

The volunteers have been helping from morning until evening to prepare “family” packs consisting of rice, cans of sardines and noodles placed in sacks and delivered by dump trucks or military helicopters to typhoon-ravaged areas.

The lobby of the provincial capitol has been transformed into a relief-packing center where volunteers can walk in anytime to help.

The DSWD has opened a new relief-packing center at the Iloilo Sports Complex to accommodate more volunteers.

Iloilo businessmen and business groups, including the Chamber of Commerce and Industry in the province, have launched a series of relief missions in northern Iloilo, distributing food and other relief materials.

Photo enthusiast and a native of Concepcion, Iloilo, Romeo Banias is raising funds in Chicago for the victims. He has offered a free printed copy of his photographs on Flickr to any donor who gives $50 or more. He has so far raised at least $1,815.

“This is my way of helping my community back home,” Banias said on his Facebook page.

In Dublin, Marathon Club Ireland and Filipino-Irish Runners Club are organizing a fund-raising marathon on Nov. 23 in Howth Harbour. Proceeds from the marathon will be sent to typhoon victims in the Philippines, Rolando Espina of Negros Occidental said in an e-mail.

Alumni members in Canada, the United States and Europe of the University of the Philippines Visayas-based Silak Brotherhood and Silab Sisterhood have also gathered clothes and money for food packs that will be distributed on Sunday.

Members of the Filipino Association of Gloucestershire in the United Kingdom also sent donations to the British Red Cross fund-raising drive, according to its chair and former Inquirer Iloilo correspondent, Raymund Padilla.

Residents of Antique, Aklan and Capiz living outside the provinces and other countries have also put up Facebook pages like “#BangonAntique” and “#Help Capiz” asking for donations for their province mates.—With a report from AFP