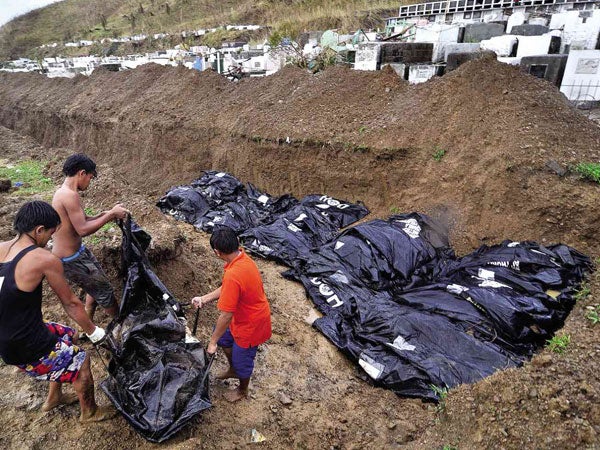 Policemen and volunteers bury some 100 bodies in a mass grave in the Tacloban City public cemetery on Thursday. RICHARD A. REYES

MANILA, Philippines–Even the government’s estimates of casualties from the Supertyphoon “Yolanda” have  come under criticism amid increasing disapproval of the Aquino administration’s response to the typhoon, the strongest ever recorded, that roared through the central islands of the Visayas a week ago.

The death toll from Yolanda doubled overnight yesterday, with the United Nations, citing regional officials, saying there were at least 4,460 deaths, even as the National Disaster Risk Reduction and Management Council (NDRRMC) maintained a much lower figure.

Showing a dramatic increase     in its tally, the NDRRMC also confirmed that at least 1,140 persons were missing while at least 12,165 persons were injured.

The preliminary number of missing as of Thursday, according to the Red Cross, remained at 22,000. That could include people who have since been located, it has said.

Until yesterday, the NDRRMC updates on the damage and casualties had been coming in trickles.

The President has been criticized over the unclear estimates of casualties, especially in Tacloban City, the capital of hardest-hit Leyte province.

Mr. Aquino has been on the defensive over his handling of the storm, given warnings of its projected strength and the risk of a storm surge, and now the pace of relief efforts.

He has said the death toll might have been higher had it not been for the evacuation of people and the readying of relief supplies, but survivors said they had little warning of any seawater surge.

“Of course he doesn’t want to create too much panic. Perhaps he is grappling with whether he wants to reduce the panic so that life goes on,” he said.

Sticking to its figures

“We will stick to our figures,” NDRRMC executive director Eduardo del Rosario said of the higher estimate given by the Ocha, which said it based its report on government sources.

The Ocha said the number of 4,460 was given by the regional task force of the NDRRMC.

“As of 13 November, the government reported that 4,460 people have died,” an Ocha   statement said.

Asked for the source of the figures, the Manila-based Ocha spokesperson Orla Fagan said: “We are getting it from the operations center of the regional task force set up by the NDRRMC.”

Del Rosario said his agency was still trying to find out how the United Nations  arrived at its estimate.

“Our source is the local government units,  the mayors or their designated officials,” he said.

Del Rosario said the NDRRMC had to countercheck the figures reported by the mayors, claiming that two days ago a mayor had given a tally that turned out to be half of the actual number of dead.

He said from now on the official announcements would come only from the NDRRMC.

“If [the number of casualties] goes up, maybe it will be slight,” he said.

A notice board in the Tacloban City Hall yesterday estimated the deaths at 4,000, double the 2,000 reported a day before. The toll, written in blue marker on a white-board easel, is compiled by local officials who started burying bodies in a mass grave on Thursday.

Tacloban City Mayor Alfred Romualdez said some people might have been swept out to the sea and their bodies lost after a tsunami-like wall of seawater slammed into coastal areas. One neighborhood had a population of between 10,000 and 12,000, and now was completely deserted, he said.

The City Hall toll is the first public acknowledgment that the number of fatalities would likely far exceed an estimate given this week by Mr. Aquino, who said on Monday that the loss of life from Yolanda would be closer to 2,000 or 2,500.

The Philippine National Police confirmed yesterday that Soria had been removed from his post but said it had nothing to do with the high death toll estimate he gave.

“It was deemed by higher headquarters that Chief Superintendent Soria might need to go through some stress debriefing,” said Senior Supt. Reuben Sindac, the PNP spokesperson.

He said Soria was due to be transferred to the headquarters in Manila. But a senior police official told Reuters he believed Soria was reassigned because of his unauthorized casualty estimate.

Soria will be replaced by his PMA Class 1982 classmate, Chief Supt. Henry Losañes, the former director of the PNP Maritime Group.

Adding to the confusion was the announcement by the Philippine consulate in Los Angeles, California, home of a sizable Filipino immigrant community, of a 23,000 death toll, the biggest estimate by far.

“Twenty-three thousand, as of today, are reported dead,” Consul General Hellen Barber de la Vega told members of the media and community leaders who attended a “public meeting” to get updates on rescue and relief efforts in the affected areas.

It came as a surprise to many in the audience, who had heard reports of much lower numbers: 2,360 from the Philippine government and 4,460 from the United Nations.

Meanwhile, Del Rosario said on Thursday that 1,000 cadaver bags were sent to Tacloban City at the request of field units.

A representative of the Department of Health to the NDRRMC also said a total of 8,800 body bags had been sent to Tacloban City since  Sunday, aside from the 10,000 body bags donated by the United Nations.

Also on Thursday, Navy teams recovered 90 bodies, including those of 11 children, most of them from the Tacloban Bay.

Most of the casualties reported by the NDRRMC were from the Eastern Visayas region, with 3,422 dead, 11,906 injured and 1,124 missing.

All the casualties were listed as unidentified.

The rest of the dead were accounted for by other regions: Western Visayas, 113; Central Visayas, 72; Bicol, 5; Mimaropa, 5; Calabarzon, 2; Caraga, 1; and the Zamboanga Peninsula, 1. With a report from  AFP