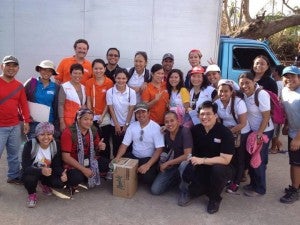 TYPHOONHAIYAN “Today World Vision distributed food, water, and sanitation supplies to 900 families in northern Cebu. It was the first aid this community has been given since the Typhoon hit six days ago. It was a day of joy and relief for these 900 families. The gratitude of thousands of people who World Vision helped today was immense. ??The BBC, who were there filming, told us it was the first good news story since the Typhoon hit. Lives were saved today.” (From WVNZ CEO Chris Clarke at today’s distribution).

The sacks handed to families included 15 kg (33 lbs) of rice, beans, cans of sardines, cooking oil, clean drinking water and hygiene supplies. They were sourced locally and put together with the help of a supermarket in the region.

Cecil Laguardia, Emergency Specialist for World Vision, said, “The distribution was a success and hundreds of families now have enough food, but it’s just the start. There are more communities on the island who have been terribly affected and are in desperate need.”

A World Vision assessment team had already visited the villages and determined that the area had been badly hit by Typhoon “Yolanda” and that residents had suffered further because of existing levels of poverty.

“The damage from the typhoon could be seen everywhere and everyone lining up for food today had a dramatic story to tell,” added Laguardia. “The community has shown incredible resilience and patience, particularly as many roads have been impassable, and it has taken time to get this aid through to those who need it most.”

More distributions are planned in the coming days. The immediate need is food and water, followed by emergency shelter. World Vision aims to reach 400,000 people in its relief effort. The agency has been working in the Philippines for 55 years and has 500 staff in the country. Please join us to help: filipino.worldvision.org1.866.387.5683

Aquino back to Ground Zero on Saturday