TOKYO—Japan on Tuesday said it would send some 40 members of its de facto military, known as the Self-Defense Forces, to help out with relief efforts in the typhoon-ravaged Philippines.

The troops will take part in medical support and transport operations, Tokyo said, adding that it may send more personnel if necessary following Manila’s request for assistance.

The SDF, which have helped in previous regional relief efforts including the 2004 Indian Ocean tsunami, would be dispatched at the “earliest” possible time, Chief Cabinet Secretary Yoshihide Suga told reporters in Tokyo without elaborating. 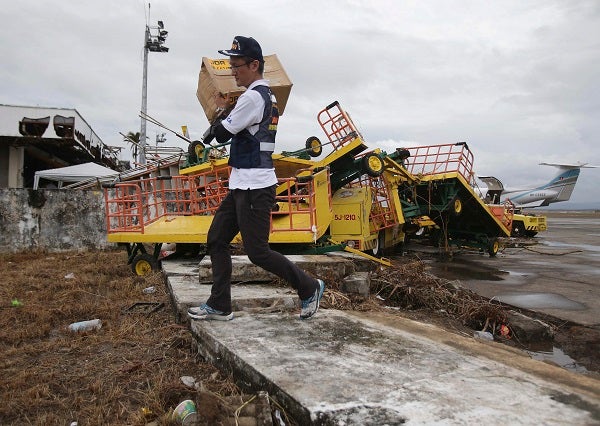 A member of the Japanese Disaster Relief Team carries goods as they arrive to assist survivors of Typhoon Haiyan in Tacloban, Leyte, central Philippines on Tuesday, Nov. 12, 2013. Japan has decided to donate $10 million to the Philippines for emergency aid to victims of Typhoon Haiyan. The Foreign Ministry said Tuesday the money will be given to international aid organizations for emergency shelters, food and water. Japan had already dispatched an emergency medical team to the disaster area. AP/Aaron Favila

Their work would be focused on the devastated city of Tacloban, four days after one of the biggest storms in recorded history demolished entire communities across the central Philippines.

The provincial capital was the first Philippine city to be liberated from Japan’s occupying forces by US troops in 1944 during World War II.

Tokyo also said it would supply $10 million in grant aid to provide evacuees with emergency shelters and other help through aid organisations.

The US and Britain have deployed warships carrying thousands of soldiers to assist in a vast operation to help nearly 10 million people affected by Friday’s super typhoon.