Foreign governments and agencies have announced a major relief effort to help victims of the Philippine typhoon. Here are some of the pledges they have made: 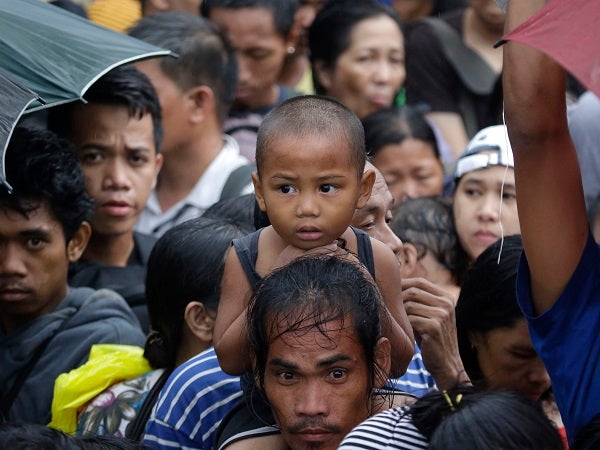 Typhoon survivors queue up to get a chance to board a C-130 military transport plane Tuesday, Nov. 12, 2013, in Tacloban, central Philippines. Thousands of typhoon survivors swarmed the airport here on Tuesday seeking a flight out, but only a few hundred made it, leaving behind a shattered, rain-lashed city short of food and water and littered with countless bodies. AP

The United States has pledged $20 million in immediate aid and has ordered the aircraft carrier USS George Washington to the sail to the Philippines to provide assistance in the wake of the typhoon. It was expected to arrive in about two days. Officials from the U.S. Agency for International Development are deployed around the country to monitor the damage.

The United Kingdom is deploying a Royal Navy warship and donating a total of 10 million pounds’ (roughly $16 million) worth of humanitarian assistance in aid of the victims of the typhoon, British Prime Minister David Cameron said.

Australia announced assistance of 10 million Australian dollars ($9.4 million). That includes the deployment of an emergency medical team, aid to the U.N. Flash Appeal and aid to Australian non-governmental organizations for immediate life-saving assistance. 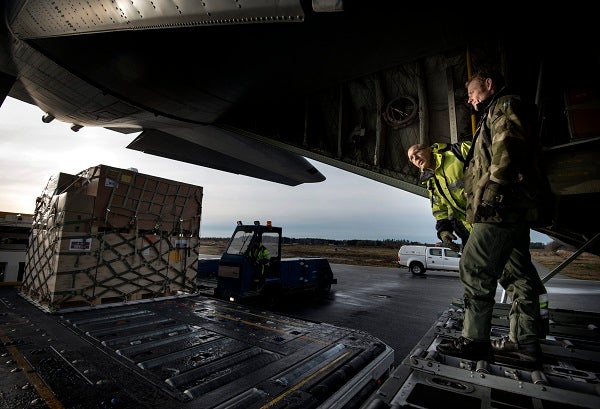 The United Nations World Food Program said it has allocated $2 million for the disaster response and officials joined an assessment mission to survey damage in Leyte and Samar provinces.

WFP said it will send more than 40 tons of high energy biscuits and work with the Filipino government to help with logistics and emergency communications systems. It asks for donations at www.wfpusa.org.

UNICEF said its staff in the Philippines is being repositioned to help in relief efforts and 66 tons of emergency supplies are being sent from Copenhagen. An airlift set to arrive on Tuesday will include water purification systems, storage equipment and sanitation supplies. Donations can be made to UNICEF at unicef.org/support.

Japan will donate $10 million to the Philippines and has sent a 25-member relief team of mostly medical staff. 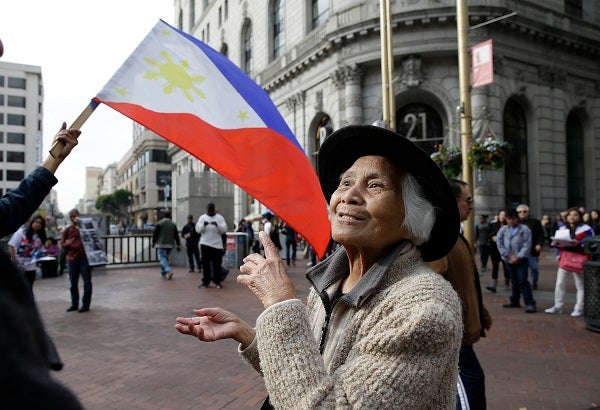 Caron Grace thanks a local Filipino group for their work after making donation for typhoon relief efforts Monday, Nov. 11, 2013, in San Francisco. The United States said Monday it is fully committed to helping the Philippines recover from one of the most powerful typhoons on record, and is providing $20 million in immediate aid. AP

Canada has promised to donate up to $5 million in support of humanitarian organizations helping typhoon victims. In addition, the government pledged to match every dollar donated by individual Canadians to registered Canadian charities for typhoon relief.

HSBC Group is donating over $1 million toward victims of the typhoon and is activating a bank-wide drive to raise funds from its employees globally.

Israel plans to set up a field hospital near the disaster area that is likely to focus on trauma care. Israel has sent a team of six medical and logistics experts to study the best location to erect it.

The American Red Cross said it has deployed two people to assist with assessments in the Philippines and activated its family tracing services. It asked those who want to support relief efforts to mail a check to their local Red Cross chapter, with “Philippines Typhoons and Flood” in the memo line.

World Vision said it is putting together resources to assist 1.2 million people, including food, hygiene kits, emergency shelter and protection. It asked for one-time donations to be made at worldvision.org.

AmeriCares is preparing to deploy an emergency response team to the Philippines. To donate go to http://americares.org.

The International Rescue Committee has dispatched an emergency team to Manila and launched a $10 million appeal. The IRC will work to determine which of its areas of expertise — from water and sanitation to education — are most needed.

Doctors Without Borders said it has 15 members in Cebu city and will send an additional 50 people in the next few days. It said it also is sending 329 tons of medical and relief supplies on three cargo planes. To donate, go to www.doctorswithoutborders.org/donate .

Lutheran World Relief said it has deployed its local staff to stricken areas and is appealing for $2.5 million to aid its recovery effort. To donate, go to http://lwr.org/donate/

American Jewish World Service is collecting money to provide directly to local groups in the Philippines. To donate, go to http://www.ajws.org.

Read Next
Japan sends military to typhoon-hit Philippines
EDITORS' PICK
House energy committee chair Arroyo bats for cheap electricity
vivo’s coming to town to grant wishes with more holiday promos
Pagasa: Warm, sunny Sunday in most parts of PH
EDITORIAL: To a bike-friendly future
The Best Tech Gifts For The 2022 Holidays
Is it safe to talk politics again at family gatherings? ‘The Reconciliation Dinner’ shows us what that’s like
MOST READ
LOOK: Vhong Navarro transferred to BJMP detention facility in Taguig
The Elephant Man in the Senate
Posh village as ‘shabu’ haven
LOOK: Zanjoe Marudo bonds with Ria Atayde, her family
Don't miss out on the latest news and information.