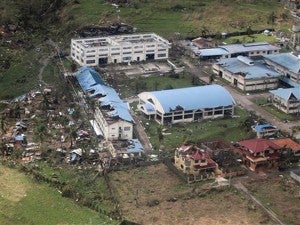 MANILA, Philippines–The United Nations will Tuesday launch an urgent aid appeal expected to seek hundreds of millions of dollars to help the Philippines recover from the ravages of Supertyphoon “Yolanda” (international name: Haiyan).

UN humanitarian chief Valerie Amos was headed for the Philippines to lead a “flash appeal” for cash, officials said, saying the scale of devastation was so far-reaching that a major emergency effort is needed.

The announcement came as the Pentagon said it had ordered an aircraft carrier, other ships and scores of aircraft that had been on a stop in Hong Kong to head to the stricken archipelago.

Ahead of the emergency appeal, UN Secretary General Ban Ki-moon welcomed the aid already pledged but said contributions “must expand urgently in the days ahead,” given the sheer damage wrought by Haiyan.

Britain is sending a ship and a transporter plane to assist with the relief effort following the typhoon, which may have killed more than 10,000 people in what is feared to be the worst natural disaster ever to hit the Philippines.

“The scale of devastation is massive and therefore it will require the mobilization of a massive response,” John Ging, the UN’s humanitarian operations director said, stressing the death toll was expected to rise.

“Many places are strewn with dead bodies,” Ging told a news conference at the UN headquarters in New York.

“We are certainly expecting the worst. As we get more and more access we find the tragedy of more and more people killed in this typhoon.”

Vietnam, itself faced with mass evacuations as a weakened Haiyan swung through its territory Monday, offered aid worth $100,000 and vowed to stand by the Philippine people.

The relief operation was focused on the city of Tacloban on Leyte island, several days after one of the biggest storms in recorded history demolished entire communities across the central Philippines.

Delivering on a promise of assistance from President Barack Obama, about 180 US Marines were deployed to the Philippines on Monday to support local forces, carry out search and rescue work and help humanitarian efforts on the ground.

Britain’s HMS Daring, a destroyer, will sail to the Philippines “at full speed” from its current deployment in Singapore, and will be joined by a Royal Air Force C-17 transport plane, Prime Minister David Cameron said.

The aid will include tarpaulins, sleeping mats, mosquito nets, water containers and health and hygiene kits. A team of Australian medics will leave on Wednesday via a C-17 military transport plane from Darwin to join disaster experts already on the ground, the government said.

Philippine rescue teams were said to be overwhelmed in their efforts to help those whose homes and livelihoods were destroyed after Haiyan ravaged large swathes of the country on Friday.

The UN children’s fund Unicef said a cargo plane carrying 60 tons of aid including shelters and medicine would arrive in the Philippines Tuesday, to be followed by deliveries of water purification and sanitation equipment.

The UN refugee agency UNHCR was also organizing an airlift carrying aid including hygiene kits containing basics such as soap, blankets and underwear.

-The European Commission said it would give three million euros ($4 million) toward relief efforts.

-Germany’s embassy in Manila said an initial shipment of 23 tons of aid was being flown in and German rescue teams were already at work.

-Japan is sending a disaster relief and medical team of 25 people, while Malaysia also readied a relief crew and cash aid was offered by Taiwan and Singapore.

– New Zealand increased its humanitarian relief on Monday, bringing its total to NZ$2.15 million (US$1.78 million), while Canada has promised up to US$5 million to aid organisations.

-Medecins Sans Frontieres (Doctors Without Borders) said it was sending 200 tons of aid including medicine, tents and hygiene kits to arrive mid-week.