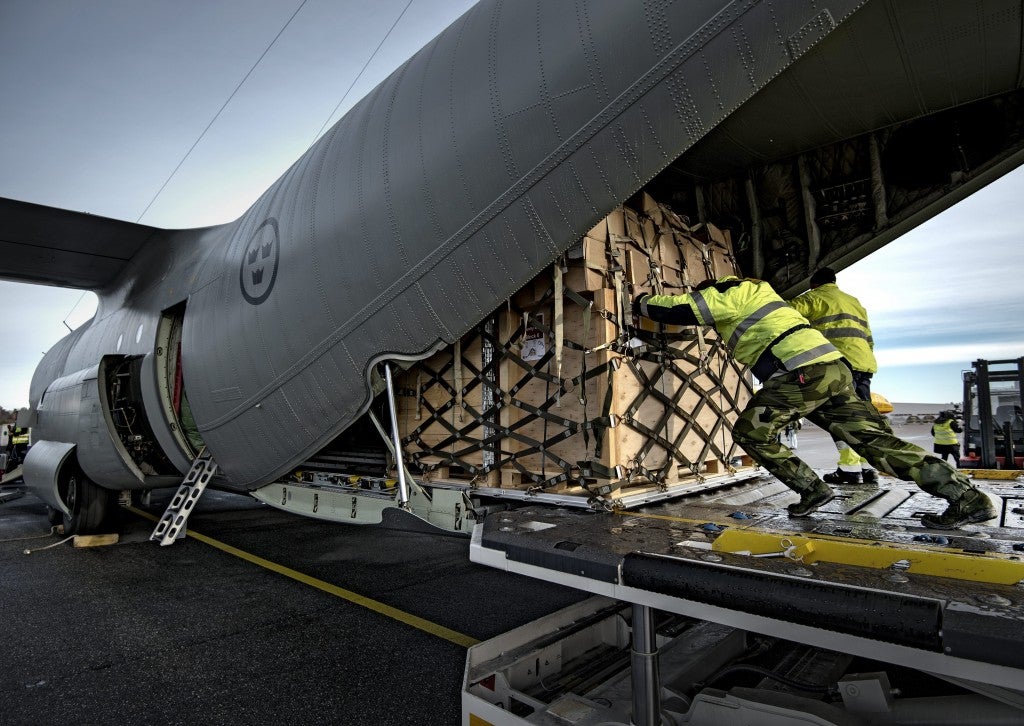 Staff load a Hercules aeroplane with relief equipment at Orebro airport in central Sweden, Monday, Nov. 11, 2013. The Swedish Civil Contingencies Agency, together with its International Humanitarian Partnership, on Monday sent equipment to support the UN disaster relief work in the Philippines. Typhoon-ravaged Philippine islands faced a huge relief effort that had barely begun Monday, as bloated bodies lay uncollected and uncounted on the streets and survivors pleaded for food, water and medicine. AP PHOTO/TT NEWS AGENCY, PER KNUTSSON

In the face of what may well be the worst disaster to hit the Philippines, the world is extending a helping hand.

Support and aid from all corners of the world poured in as reports and images of even graver devastation started to surface from severely hit towns in Eastern Visayas on the third day of relief, rescue and recovery efforts.

Up to 22 countries and the European Union have provided assistance to the country so far, including financial aid, relief supplies (food and non-food items) and personnel, including medical workers, search and rescue crews, and humanitarian experts assisting in needs assessment, according to the Department of Foreign Affairs (DFA).

The UN Children’s Fund (Unicef) said a cargo plane carrying 60 tons of aid, including shelters and medicine, would arrive in the Philippines on Tuesday, to be followed by deliveries of water purification and sanitation equipment.

US President Barack Obama was among world leaders who expressed his nation’s solidarity with the Philippines.

“Michelle and I are deeply saddened by the loss of life and extensive damage done by Supertyphoon  ‘Yolanda.’ But I know the incredible resiliency of the Philippine people and I am confident that the spirit of bayanihan will see you through this tragedy,” Obama said in a message from Washington.

He said the United States “is already providing significant humanitarian assistance, and we stand ready to further assist the government’s relief and recovery efforts. Our thoughts and prayers go out to the millions of people affected by this devastating storm.”

The United States has made an initial $100,000 (P4.32 million) available on Nov. 9 following a formal request for international assistance by the Philippine government.

The US Agency for International Development (USAID) is sending supplies, including emergency shelter and hygiene materials, to help 10,000 families. The supplies are expected to arrive early this week, according to a spokesperson.

The USAID is also dispatching 55 metric tons of emergency food to feed 20,000 children and 15,000 adults for up to five days.

“I thought Typhoon ‘Pablo’ was the worst. Unfortunately, this is far worse than that,” said Gloria Steele, USAID director in the Philippines.

An emergency response team sent by USAID arrived in Leyte province, which is one of the hardest-hit areas. The team is conducting damage assessments and tracking humanitarian conditions.

About 90 US Marines and sailors arrived in the Philippines as part of a first wave of promised US military assistance, which included aircraft for search and rescue operations.

Some 86 Marines are part of the group that arrived in the country on Monday. Brian Goldbeck, the US charge d’affaires in Manila, said at Villamor Air Base Monday that US troops from Japan “scrambled to get to the worst-affected areas.”

Col. John Peck, chief of staff of the 3rd Marine Expeditionary Brigade from a US base in Okinawa, Japan, said assets deployed to the Philippines included five KC-130 (extended-range version of the C-130 Hercules), capable of hauling large payloads to disaster areas; four MV-22 Ospreys, tilt-rotor planes that can land like helicopters in areas without airstrips; two P-3 Orion aircraft for surveying affected areas; and one UC-35 transporter.

At the same time, US aid groups launched a multimillion-dollar relief campaign of their own. World Vision, based in the Seattle area, said a shipment of blankets and plastic tarpaulins would arrive on Monday as a first step in its plan to help some 400,000 people.

The typhoon is estimated to have killed more than a thousand people in the Visayas. Most of the deaths appear to have been caused by surging seawater strewn with debris that many said resembled a tsunami, leveling houses and drowning its victims.

The initial shipment of 5,000 blankets and 3,000 tarpaulins, from a German warehouse, will give survivors the material to build temporary shelter, said World Vision, which has been active in the Philippines since 1954 and has a staff of 600 people in the country.

The UN World Food Program said it mobilized a $2-million relief program that would include flying 40 tons of fortified “high energy” biscuits to the Philippines from Dubai.

AmeriCares, based in Stamford, Connecticut, said it had a relief team on the ground in the Philippines and was shipping relief supplies. The shipment included antibiotics, pain relievers, wound care supplies and other medical aid for a least 20,000 people.

US groups, including CARE, Save the Children and the American Red Cross, appealed on the Internet to Americans for cash donations. World Vision had a target of $3 million in US donations and a global total of $20 million.

CARE, based in Atlanta, said it aimed to help 30,000 families with emergency and longer-term assistance.

The American Red Cross, headquartered in Washington, dispatched a telecommunications unit and, through its local chapters, activated a family tracing service for people with relatives in the Philippines.

“The Philippines has also accepted the offer of the United Nations for the issuance of a flash appeal (for aid), which will be launched soon,” said Hernandez in reference to the international call for assistance the UN issues following a major disaster.

“The UN is now undertaking needs assessment activities in the affected areas,” he said.

A Japan disaster relief medical team, consisting of 24 members, will be sent to the area affected by Yolanda, the Embassy of Japan said in a statement. The team was scheduled to arrive in the Philippines Monday night.

On Nov. 10, two personnel from Japan’s Ministry of Foreign Affairs and Japan International Cooperation Agency arrived in the country for damage assessment.

China has sent its condolences to the Philippines as it expressed hopes for the country’s recovery.

“We would like to express our heartfelt condolences and sympathies to the victims and the families that have suffered immense losses of lives and properties,” the Chinese Embassy in Manila said in a statement.

The Australian government announced on Monday P410 million in aid on top of the earlier P15.5 million emergency funding to help the Philippines address the catastrophe.

“The magnitude of this disaster shocked not just Australians, but people from all over the world. Many people have lost everything—their loved ones, their homes, and their capacity to earn an income,” Australian Ambassador to the Philippines Bill Tweddell said in a statement.

“The first thing I did this morning was to receive a briefing on the dire situation in parts of the Visayas. We still don’t have a full picture of the scale of destruction and loss of life but we are determined to put into effect our own procedures to ensure that EU assistance reaches the most needy as quickly as possible,” Piebalgs said.

The United Kingdom announced P414 million on top of earlier funding of some P276 million.

“Based on the needs’ assessments issued by the Filipino authorities, a cargo plane will be taking off in the coming hours from Madrid, in collaboration with the Spanish Red Cross, carrying water treatment, power generators, bladders, nonfood items and various technical teams of experts, aiming to help guarantee WASH (water, sanitation and hygiene) needs in the worst-hit areas of Visayas,” the Spanish Embassy said in a statement.—With reports from Amy R. Remo, Paolo G. Montecillo, and wires