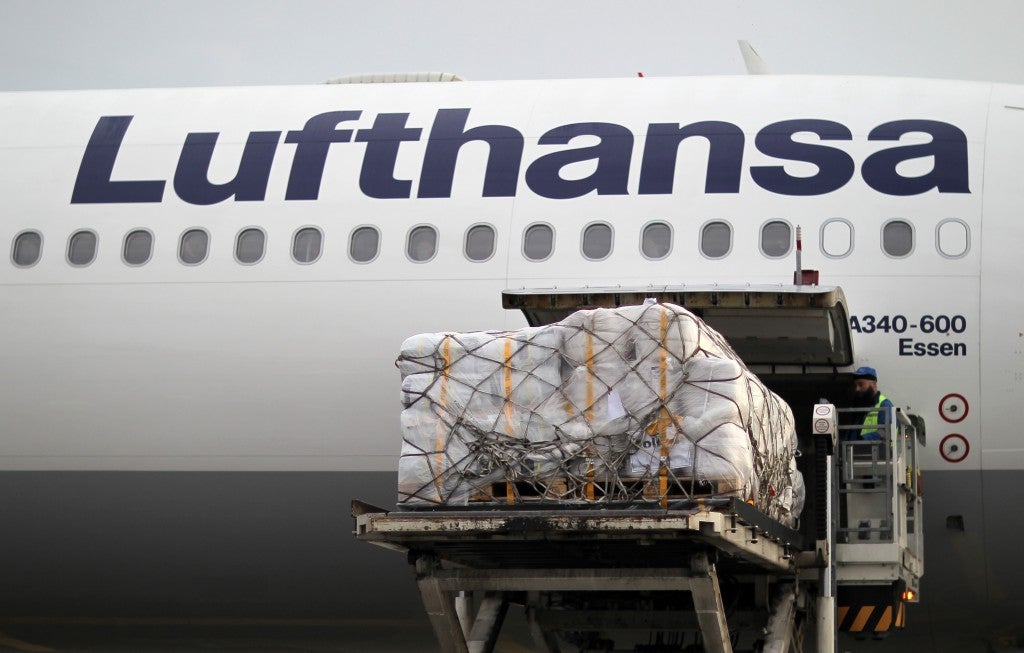 A worker loads humanitarian aid for the Philippines into a Lufthansa plane at Rhein-Main Airport in Frankfurt, central Germany, Sunday, Nov. 10, 2013. Countries and organizations around the world, including the US, the UN and the EU, on Sunday scrambled aid to the Philippines as the devastation wreaked by Supertyphoon “Yolandan” (international name: “Haiyan”) became clearer. AP PHOTO/DPA, FREDRIK VON ERICHSEN

PARIS—Countries and organizations around the world, including the US, the UN and the EU, on Sunday scrambled aid to the Philippines as the devastation wreaked by Supertyphoon “Yolandan” (international name: “Haiyan”) became clearer.

US military help was on its way, after the Pentagon said Defence Secretary Chuck Hagel was responding to a request from Manila for assistance. It included search-and-rescue ships and transport aircraft deployed from the United States’ Pacific deployments.

The European Commission said it would give $4 million (three million euros) to help in relief efforts.

Britain offered another emergency support package worth $9.6 million. Germany’s embassy in Manila said an initial shipment of 23 tons of aid was being flown in and German rescue teams were already at work.

Pope Francis, “deeply saddened” by the disaster, on Sunday urged Catholics to provide “concrete help” and led 60,000 people in prayers for the Philippines.

“Sadly, there are many, many victims and the damage is huge,” he said. On Saturday, he had tweeted his sympathy to the Asian nation.

— Médecins Sans Frontières (Doctors Without Borders) said it was sending 200 tons of aid—medicine, tents, hygiene kits—to arrive mid-week, with a first cargo plane leaving from Dubai on Monday and another from Belgium on Tuesday.

— Up to $5 million promised by Canada to humanitarian organizations trying to help survivors in the Philippines.

— New Zealand and Australia donating an immediate $490,000, with further support when the devastation is better assessed.

— Oxfam, the British-based relief group, said it has sent an assessment team ahead of aid operations.

The immensely powerful supertyphoon struck Friday and was the worst natural disaster ever to hit the Philippines. Stunned authorities there say the death toll could be well over 10,000.

The country’s officials seemed overwhelmed by the scale of the death and destruction. Looters were reportedly turning violent, security was lacking, drinking water and food were scarce, the stench of corpses was heavy, and shelter was needed.

The typhoon was Sunday headed for Vietnam, prompting the evacuation of 600,000 people.